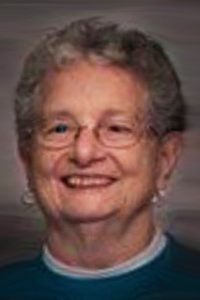 Irene L. Bergeron, 84, passed away on September 2, 2020 at Atria Fairhaven after a period of declining health. She was the wife of the late Roger Bergeron with whom she shared 61 years of marriage. Born in New Bedford, she was the daughter of the late George and Florina (Caouette) Talbot. She was a lifelong resident of Fairhaven.

Mrs. Bergeron was employed by the Five & Dime department store in downtown New Bedford during her young adult life. Subsequently she worked at Titleist (Acushnet Company) for 30 years, in various positions on the production line and quality assurance, until her retirement. She was a communicant of St. Joseph’s Catholic Church in Fairhaven.

She lived a full and productive life creating long-lasting memories that will aid to comfort those family and friends she left behind. She directly contributed to the development of not only her sons but also their children and their children’s children. She lives on through all of us here with whom she has touched in some way throughout her life.

A Mass of Christian burial will be conducted on Friday Sept. 11, 2020 at 11 AM at St. Joseph’s Church, Fairhaven. In accordance with her wishes, visiting hours are omitted. A private interment ceremony will be conducted at the Massachusetts National Cemetery in Bourne where she will be reunited with her late husband in rest, at a later date. Funeral arrangements are being coordinated by Saunders-Dwyer Mattapoisett Home for Funerals, 50 County Rd., Mattapoisett. In lieu of flowers, a donation to the American Alzheimer’s Association or a charity of your choosing can be made on her behalf. For online condolence book, please visit www.saundersdwyer.com.