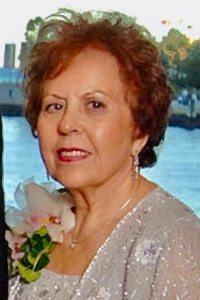 
Louise passed away peacefully at the age of 89 on September 5, 2020. Daughter of the late Missak and Veronica Berberian of Arlington. Beloved wife for over 63 years to Arthur Panosian of Belmont and South Yarmouth. Devoted mother to Arthur Panosian Jr. of Belmont, Steven Panosian of Waltham, David Panosian and his wife Linda of Burlington, and Jennifer (Panosian) Esserian and her husband John of Lexington. Loving grandmother to Zachary, Victoria, Slater and Alexandria Panosian and John and Robert Esserian. She leaves her three sisters and brother including Rose Garabedian and her husband Oscar of Arlington, Mary Kupjian and the late John Kupjian formerly of Winchester, Dianne Talanian and her husband Kenneth of Wellesley, and George Berberian and the late Maria of Arlington. She was also survived and adored by many cousins, nieces, nephews and friends.

As the oldest of five, Louise grew up in Arlington and graduated high school in 1948. She frequently worked in her family business United Market and subsequently went to work at Stone and Webster in Boston, and then at the Arlington town hall treasurer's office. After meeting Arthur and undergoing a brief six month courtship, Louise married him in 1957. She devoted her life over the following six decades caring for her husband and four children. For many years Louise was actively involved, since its inception in 1960, at the Holy Trinity Armenian Church Couples Club and the Women’s Guild. Louise loved traveling with her husband to the Caribbean Sea and the islands, Aruba, Hawaii, and the Mediterranean Sea touring European countries. She loved weekly bowling with her friends and the beach where she enjoyed her summers on Cape Cod. As an avid reader, she always had a good book by her side. She had an artistic talent and enjoyed painting scenery and floral arrangements with oil as her medium. She loved to cook and bake and was always in the kitchen preparing something delicious.
Louise’s middle name was Baitzar, meaning “Bright Light”. This literally described her when she walked into a room smiling. It was contagious. She will be fondly remembered by family and friends and will be painfully missed.

Due to the Covid-19 Pandemic and current public safety measures, the funeral and interment will be private. In lieu of flowers, memorial donations in her name may be made to Holy Trinity Armenian Church, 145 Brattle Street Cambridge, MA 02138.