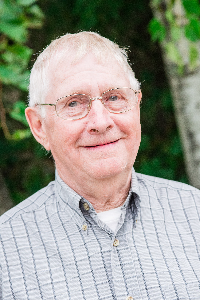 Of Oakdale, Minnesota.
Passed away on September 5 at the age of 88. After a short hospital stay, Larry died peacefully with his beloved wife, Carol, by his side. Larry was born in Dickinson, North Dakota, on November 13, 1931, to Jacob Krank and Anna Roeder Krank. Larry was one of 17 children. He was a Korean War Veteran. Larry worked at Armour and Company in South St Paul and later at Unisys in Eagan. Larry is preceded in death by his granddaughter, Becky. He is survived by his wife, Carol; children Gary (Colleen), Brad (Judy), Pam (Bryan McGee), Julie (Gary) Kelly, Shelley (Denny) LeClaire, and Diane (Kevin) Kwiatkowski; along with grandchildren, great-grandchildren, one sister and one brother. Due to COVID, there will be a private Catholic mass and interment. No visitation.