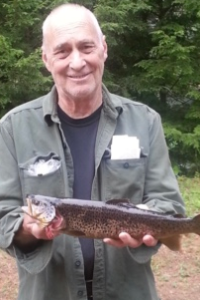 SEBAGO- Kenneth Wayne Chase, 76, of Sebago, passed away unexpectedly on August 25th, 2020 at Maine Medical Center. He would want people to know this was “NOT Covid” related.
Ken was born September 26, 1943 in Laconia, NH to Everett Russel and Marie Sharon Chase. He was affectionately known to his loved ones and friends as Pa, Butch, and Beaver.
Ken attended Potter Academy where he met the love of his life, Esther Susie Douglas. Ken and Esther were married, August 6, 1966, while serving our Country in the US Army servicing tanks during the Vietnam crisis. Upon honorable discharge from the service, Ken worked as a mechanic for Rines Garage, later known as DiPrazio GMC in Ossippee, NH. In later years, Ken worked for both CB Kenworth and Krisway Trucking in Portland, ME, finishing out his career working for his son in-law at R.N. Willey & Son’s in Casco, ME.
A huge part of Ken’s life was spent on Barker Pond where many memories were made, including the annual family reunion. Ken enjoyed many years of hunting and fishing with his family and friends, which included annual trips to C Pond. Another very special annual event for Pa was going to Loudon, NH with his grandchildren for the Nascar races. Ken had a special bond with each of his grandkids. They each have fond memories and have each learned special life skills.
Ken was a long time member of the Sebago Lions Club, where he served as King Lion during the years of 1982-83 and 1987-88.
Ken is predeceased by his parents, two brothers, Donald, and Peter, three sisters, Linda Chase, Arlene Clow, and Barbara Shultz. Ken is survived by three sisters, Carol Potter and husband Sid, Betty Wasson and husband Dannie, and Nancy Johnston, as well as a sister-in-law Jean Chase. Ken had many nieces and nephews. He leaves behind his loving wife, Esther of 54 years. When asked, Ken would say, “but together for 59!”. Ken also left behind three daughters, Susan Harmon and husband Tom of Naples, Lynda Chase and boyfriend Jerry Myers, of Sebago, and Michelle (Shelly) Willey and husband Ron of Sebago.
Many knew of Ken’s 9 year courageous battle with cancer. Nothing kept him more focused and determined to live than his 6 grandchildren; Ronald Willey and girlfriend Jackie Beckwith, Daron Willey and wife Ashley Clark Willey, Kameron Willey and girlfriend Samantha Begin, Brendon Harmon and girlfriend Jessica Moody, Meghan Harmon, and Keegan Harmon.
As per Ken’s wishes there will not be a formal funeral service. There will be a memorial service at a later date.
Online condolence messages can be submitted at the Poitras, Neal & York Funeral Home website, www.mainefuneral.com
In lieu of flowers, the family is asking that donations be made in Ken’s name to The Snell Foundation, PO Box 6304, Scarborough, ME 04070.