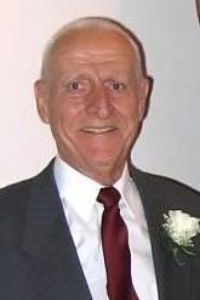 Robert A Larsh, "Bob", was born in 1936 to Wilfred and Alice Larsh and was raised in Cranston, RI with his 2 older brothers, Norman and Jerry. As a young boy, Bob played baseball with his brothers and friends in the neighborhood like all kids did back in the 40s. Bob was the youngest and his older brothers were quite protective of him. His brother Jerry would say that Bobby was a Mama's boy and yes indeed he was. Bob was the apple of his mother's eye and especially after his father passed away in 1964, Bob was very attentive to his Mom and around 1967, she came to live with his family.

On November 23, 1957 Robert married Maria Dorothy Viera, "Dottie", at St. Teresa's Church of Providence, RI. Bob had met the love of his life a year earlier on a blind date set up by mutual friends. It was love at first sight for both. Bob and Dottie started growing their family in 1958 with Laurie, 1960 with Kenny, 1962 with Bob and 1964 with Rosemary. Rosemary was our family's little angel who, in spite of her disabilities, brought out such loving, tenderness and immense patience from Bob and Dottie that they in turn shared and presented to everyone who's lives intersected with theirs. As a young boy Bob found his lifetime love of building, drawing and creating, oftentimes from scraps. He would collect bicycle parts and put them together into new bicycles that he would sell or give to his friends. Bob continued to do this for his own children. Why buy a brand new bike when Dad could make one. One year he got his Christmas wish and received an erector set with hundreds of little pieces of metal and rubber that he put together to make small cars, bridges, anything and everything that he could power by a small motor that came with the kit. That erector set was his prized possession for over 40 years until he passed it on to his grandson. That love of building and creating stayed with Bob his entire life. If you could not find Bob, he was in his workshop making something, some little knickknack to sell or give away to friends and family. There are probably hundreds of small, 5 inch wooden dogs holding a post it note in its mouth in the homes of friends, family and anyone else he knew. What ever Dottie would see at a flea market or craft show, Bob was there ready to replicate it. In his workshop he was in his happy zone.

Bob's other passions were fishing, boating and the love of having family and friends over to play music, to sing, to play cards, to play pool or swim in the pool. Bob shared these passions with Dottie and they passed on their love of these things to all their children. His boys followed in his footsteps building their livelihood as Ken did with fine carpentry skills and Bob with his drawing and drafting abilities.

Bob retired as a machinist from Sandvik Industries in 1998. Shortly thereafter he and Dottie left Rhode Island to move to Bradenton, Florida. They wanted an active life in a warmer climate where they could enjoy their boat and the beach. New possibilities and new adventures! Bob became involved in his community association and served on its board. He even started "working" as a DJ for the association's parties and events with Dottie by his side. The biggest being the annual New Years Eve party. Bob was a self taught "musician", though he would never describe himself as such. He played the ukulele, the harmonica, piano, guitar and the organ. He especially loved the organ and soon he had traded in his small organ for a huge organ that did everything but walk. He would play for family and friends or usually just for the pure joy of playing for himself or playing while Dottie sang with him in the evening. Even when they moved into assisted living, the organ followed. Bob would play in the community area often leading sing a longs with the other residents.

Bob battled dementia starting around 2013, the same time Dottie was diagnosed with Alzheimers. They struggled to take care of each other like they always had. Bob was by her side when she passed away in 2014. He was a kind, caring and gentle soul who never met a stranger. Bob is now at peace with his beloved Dottie, his son Ken and daughter Rosie. He is survived by his daughter, Laurie Moody (Daniel) and his son Robert Larsh Jr. and his daughter in law Francine Downs Larsh; His grandchildren Jenna Larsh, Kendra Larsh, Daniel Larsh, Alexander Moody (Kali), Katie Larsh and Alicia Moody Peterson (Andrew); his great grandchildren Savannah, Connor, and Grayson Peterson and Axel Moody.

Services will be held in St. Michael's Church, 80 Farnum Pike, Smithfield, RI on Friday, September 4th at 10:00 am. Bob will be laid to rest with his family in HIghland Memorial Park Cemetery in Johnston, RI in a private ceremony.