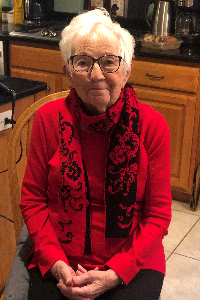 Elizabeth “Betty” White of Canton, formerly of Hyde Park, passed away peacefully on August 17th, 2020 at the age of 93, surrounded by her loving family. Born and raised in Boston, she attended the Jeremiah Burke High School in Dorchester, and went on to work a number of jobs in order to provide for her five children before retiring in 1995. Betty was a deeply devoted Mother, Sister, and Grandmother. An avid reader, gifted singer, and lifelong Boston sports fan; her greatest joy came from spending time with her children, grandchildren, and extended family.

Devoted mother of Stephen White and his late wife Amy of Hull, James White and his wife Karen of Canton, Judith Mason of Canton, Jan Power and her husband Kevin of Westwood, and Lisa Bizzozero and her husband Paul of Canton. Loving Nana of Stephen Mason, Jennie, Kevin, and Abbey Power, Christopher, Erika, and Ami Boughter, and Ryan White. Sister of Jack Stuart of Canton, Robert Stuart of N.H, and the late William Stuart, Richard Stuart, and Marguerite Dervan.

Funeral Mass at St. Pius X Church in Milton Thursday morning at 11:30am. Visiting hours at St. Pius X Thursday Morning prior to the mass from 10:00 am to 11:15am. Burial will follow at Canton Corner Cemetery. In Lieu of flowers, donations may be made in her memory to St. Jude Children’s Hospital at www.stjude.org.