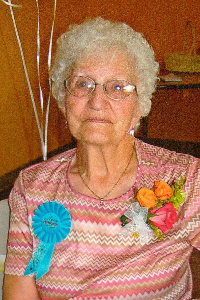 Madlyn Lorraine Simpson, 97, of Prosser, passed away on August 9, 2020 at her home at Sun Terrace.

She was born on August 16, 1922 in Andover, South Dakota to John and Elsie (Roettel) Knoll. She was raised and educated in Stratford, SD and graduated from high school in Groton, SD. Madlyn married Roy John Simpson in Groton in 1941 and the couple lived in Conde, SD until moving to Prosser in 1959.

The couple owned the snack bar at Prosser Bowl until it was destroyed by a fire. Madlyn then worked as a clerk at Cross Pharmacy until retiring in 1987. She was a member of Messiah Lutheran Church and enjoyed league bowling, woodworking, crocheting, sewing and casino trips.

She is survived by her three children, Diane (George) Dodgson of Prosser, Denise (Curtis) James of Portland and Dale (Paula) Simpson of Ellensburg; nine grandchildren; twenty-six great-grandchildren; eight great-great-grandchildren; and numerous nieces and nephews. She was preceded in death by her husband Roy Simpson on September 16, 2004; one granddaughter; two sisters; three brothers; and her parents.

Private family services will be held and she will be laid to rest next to her husband in the Prosser Cemetery. You may leave a message for the family at www.Prosserfuneralhome.com