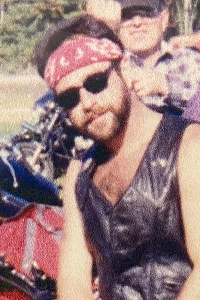 Worcester – Daniel Mastromatteo, 62, of Worcester died in his home on Friday, July 31 unexpectedly.

Mr. Mastromatteo was born in Worcester, son of the late Frank Mastromatteo and Arline (Richard) Maino and attended Shrewsbury High School. Dan was known as “Dancin’ Dan” for many years throughout the entertainment industry where he owned and operated a Disc Jockey Company.

Dan is survived by his three loving children, Daniel (Tony) Mastromatteo and Nicole of Quincy, MA, Lindsey Mastromatteo of Worcester, MA and Angela Couture and her husband, Chris of Sturbridge, MA; two brothers, Frank Mastromatteo Jr of Shrewsbury, MA and Richard Maino of New Ipswich, New Hampshire; a sister, Donna Lavallee of Fairhaven, MA; five grandchildren, Gianna, Mila, Emma, Callie and Nolan and many nephews and nieces. He is predeceased by his sister, Gail Godek of Holden.

Dan was a Harley Davidson enthusiast and found great joy in putting on his leathers and taking a ride on his “Led Sled”. He had a passion for music, especially Rock & Roll, and was an avid drum player and left handed guitarist. He loved his children and shared with them his appreciation for the outdoors. He taught them to always take a moment to look up at the stars and to “never take shit from anyone”.

Funeral services are being held privately and are under the care of Alfred Roy & Sons Funeral Home 12 Hammond Street Worcester.