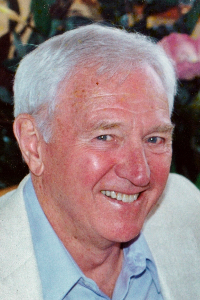 Edward Richard Moore, 86, of West Mystic, passed away peacefully on August 5, 2020, after a valiant battle with Alzheimers. He was born in Manhattan, New York, on May 17, 1934, to John and Rose Moore.

Ed grew up in Maspeth, New York, the eldest of five siblings in a close-knit Irish family. His family spent summers at their cottage in Rocky Point, a simple time filled with happy memories. In his youth he played football, loved to water ski, and worked as a lifeguard at Rockaway Beach in Queens. He graduated from Grover Cleveland High School and attended Queens College, managing paper boys at Newsday to save money for flying lessons at Flushing Airport.

Aviation was Ed’s passion from a young age. He began his career managing the airport in Montauk, New York, and in 1964 became a commercial pilot with Northeast Airlines out of New York, which later became part of Delta. He piloted both domestic and international flights over the course of his 30 years flying commercially.

After retiring from Delta in 1994, Ed purchased the Action Multi Flight Training out of Groton New London Airport. Throughout his life, he owned several different airplanes, including a Piper Cub and a 1929 Fleet biplane, which he personally restored. When it came time for true retirement, he shifted his focus to restoring a 1943 Howard DGA, his pride and joy. He and his wife, Barbara, flew “Howard” all over the country, attending air shows and gatherings of the Howard Club for which he served as president for many years. To Ed’s delight, his son shared his love of flying and followed in his footsteps to pursue a career in aviation. He also mentored and encouraged many other young aviation enthusiasts, providing his support to ensure their successful start in the industry he loved.

When not flying, Ed savored his time at home on Beebe Cove in Mystic. He loved hosting family gatherings on the deck, watching his children and grandchildren waterski and tube in the cove, and enjoying the view with a glass or two of wine. His winter home was a fly-in community in Port Orange, Florida, with his Howard close by so he and Barbara could take off on a whim.

Ed is survived by his wife of 40 years, Barbara L. Moore (Stasiewicz) of West Mystic, his children and their spouses, Debra and Stephen Kalkowski of Southington, Lisa Ackley of Groton, and Edward and Jennifer Moore of Canton; his grandchildren, Ryan and Samidha Kalkowski, Aaron Kalkowski, Tyler Ackley, Cameron Ackley, Hannah Moore, and Evan Moore; and his only great-grandchild, Miles Edward Kalkowski. Ed is also survived by his siblings and spouses, Luke and Donna Moore, Miriam and Ronald Duswalt, and Brendan Moore. He is predeceased by his brother, John, and his son-in-law, Alan Ackley. Ed had many nieces and nephews, including Cathy Hoppe who lived with him and Barbara while attending college. He also cherished his aviation friends far and wide.

A memorial celebration of Edward Moore’s life will be held on Sunday, August 16th at 1:00 p.m., in an outdoor tent at Spicer’s Park in Noank, Connecticut. To share a note of remembrance or condolence with Ed’s family, please click the link below. In lieu of flowers, memorial contributions may be made to The Alzheimer's Association at www.alz.org. In addition, an annual scholarship fund in Edward’s honor is being established to help support a young aviation enthusiast from Fitch High School in Groton, CT to pursue his or her dream of a career in aviation. Please contact the family for donation information.