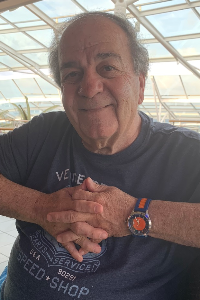 Raymond J. Maccarone, Jr., 72, of Coventry passed on Friday, July 31st surrounded by his loving family in Rhode Island Hospital, Providence. He was the husband of Judith (Straight) Maccarone. They had been married for 18 years.

He was a graduate of Long Island University and the National Judicial College in Reno, Nevada. He was a member of the National Association Unemployment Insurance Appelant Board (NAUIAB).

Ray was a lifelong employee of the State of Rhode Island, serving as the Chief Referee of the Board of Review at the Department of Labor & Training. In his younger family years, he also worked part-time as a salesman at St. Onge’s in Cranston. He proudly served over twenty years in the United States Army Reserves, 443rd Civil Affairs Battalion. Ray was a lifelong fan of the New York Football Giants, New York Yankees, Providence College Friars, and all things Disney. Like his mother, he loved family, Christmas and Frank Sinatra, and he was always excited for a long road trip to vacation with Judy.