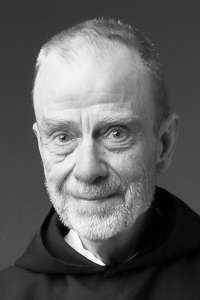 SPENCER – Br. Francis Mohr, O.C.S.O. of St. Joseph’s Abbey in Spencer, slipped away quietly and peacefully in the abbey infirmary in the middle of the night of Sunday, August 2, 2020 after suffering through a long battle with cancer.

Born George Henry Mohr, in Maywood, New Jersey on August 8, 1927 to Albert Mohr and Catherine Michels, he graduated from Bogata High School in New Jersey and without delay entered the U.S. Army. Afterward, with an honorable discharge in hand he set out to work for a while as an artist for an advertising company and then attended The School of St. Philip Neri in Boston as preparation for entering St. Joseph’s Abbey in 1952, where he received the religious name Francis. He pronounced his solemn vows in 1958.

Brother Francis was a gracious example of the hardworking Trappist laybrother. In 1964 he was sent to the Alexian Brothers Hospital School of Nursing in Chicago to prepare for work in the abbey infirmary. Among several other jobs, he was a tailor at The Holy Rood Guild and for many years he worked tirelessly as purchasing, planning and production manager at the abbey’s jams and jelly industry, Trappist Preserves. He was also the abbey’s liturgical master of ceremonies. The monks recall his patient assistance as he taught them the rubrics for celebrations on solemnities and special occasions. Perhaps most of all, Brother Francis will be remembered for his gentle, self-effacing manner. Seamlessly blending two cardinal aspects of the monastic life, he was an exemplar of contemplative prayerfulness and generous service.

Brother Francis was predeceased by his parents and his brother Al. In addition to his religious brothers at the abbey, he leaves his sister-in-law Mary, his nieces Cathy and Sharon and his nephew Jim. The monks wish to thank the lay staff at St. Joseph’s Abbey Resident Healthcare Facility, the abbey’s infirmary, and VNA Hospice for the dedicated care they gave Brother Francis in his final months. With gratitude for the gift of his presence among us, the brothers commend Brother Francis’ soul to your prayers. There are no calling hours. Due to restrictions concerning COVID-19 protocols, services and burial are strictly private. J. HENRI MORIN & SON FUNERAL HOME, 23 Maple Terrace, Spencer, 508-885-3992, is directing arrangements.