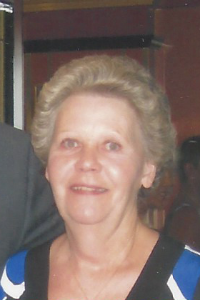 …retired Admin. Assistant; 72
TEWKSBURY – Mrs. Gail Marie (Labonte) Haddock, age 72, a devoted wife and mother, died peacefully Tuesday morning, August 4, at Lowell General Hospital after a year long battle with cancer. She was the beloved wife of James Burton Haddock, with whom she had celebrated a forty-sixth wedding anniversary this past October 21st.
She was born in Lawrence, a daughter of the late James and Irene (Ayer) Labonte, and graduated with highest honors from St. Mary’s High School in Lawrence. In addition to her duties as a wife and mother, she worked as an administrative assistant at New England Life Insurance, which became MetLife, and later at Mass Electric in North Andover. She was an avid Bingo fan, looked forward to trips to Foxwoods and Las Vegas, where she loved the slots. She thoroughly enjoyed cruising to Bermuda.
Besides her husband, she leaves a son, Stephen James Haddock of Tewksbury, a daughter, Melissa Gail Haddock and her significant other Adam Grady both of Tewksbury; a grandson, Brady James Haddock; a sister, Jean Maziarz and her husband Richard of Salem, NH, and their son, Gail’s Godson, Jeff Maziarz; a brother, William J. Labonte living in Western Mass; a sister-in-law, Linda Lecuyer of Tewksbury; and several nieces and nephews.
At her request funeral services are private. Memorials to the American Cancer Society, 3 Speen St., Suite 250, Framingham, MA 01701 are appreciated. For e-condolences visit www.legacy.com The Tewksbury Funeral Home is honored to serve the Haddock family. see: tewksburyfuneralhome.com