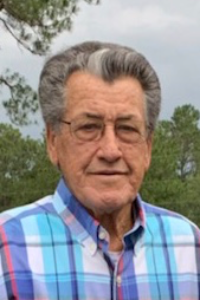 Steve “Sonny” Stinson, Jr., 81, of Enigma passed away Tuesday, August 4, 2020, at his daughter’s residence in Ocilla. His funeral service will be held on Thursday, August 6, 2020, in the Chapel of Bowen-Donaldson Home for Funerals with the Rev. Marvin Williams officiating. Mr. Stinson will be laid to rest at Tift Memorial Gardens.

Born August 11, 1938 in Berrien County, Mr. Stinson was the son of the late Steve Stinson, Sr. and Alice Bethune Stinson. He was also preceded in death by his wife, Margaret Swain Stinson. He retired from Tifton Aluminum Company and he was a member of Mount Zion Ministries in Enigma, where he served as a deacon.

Mr. Stinson is survived by one daughter and son-in-law, Regina and Bob Boykin of Ocilla; three sisters, Joyce Roberts of Alapaha, Marian Swain of Enigma and Joan Hogan of Valdosta; two grandchildren and their spouses, Lakin Bailey of Ocilla and Bryson and Vanna Boykin of Nashville; two great-grandchildren, Addie Bailey and Hudson Boykin; and special family friend, Willene McNatt of Douglas.

Flowers will be accepted or memorial gifts may be made to the American Diabetes Association, 5105 Paulsen Street, Savannah, GA 31405; or Mount Zion Ministries, P. O. Box 54, Enigma, GA 31749.