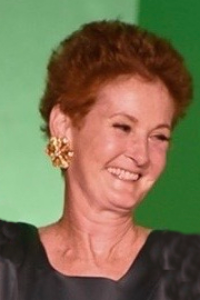 Carol Chaoui of Wellesley passed away, August 3, 2020 from Metastatic Breast Cancer at the age of 56 with her loving family of Amin, Adam, Lina, Rayan, Darin, Finn & Ollie by her side. She was first diagnosed with Stage 3 breast cancer in 2009 at the age of 45, followed by Stage 3 thyroid cancer in 2014 and both cancers metastasized in 2015. She went through countless treatments of chemotherapy, radiation including whole brain radiation, breast, spine and hip, targeted therapies, etc. She remained hopeful and positive throughout the 11 years of treatments, an avid runner she ran the Boston and New York Marathons multiple times during those years. Most recently she completed the Boston Marathon with her husband and daughter in 2018 and the New York Marathon with her daughter in 2019.

Carol graduated from Adelphi University in December of 1984 and worked in New York and Paris. She then attended Graduate School at Tufts - The Fletcher School of Law and Diplomacy, passionate about language and culture she spoke French, Spanish, English, and Portuguese. During her year abroad in Geneva, Switzerland she met her future husband, Amin Chaoui. The couple lived in Switzerland for several years before moving to the United States. They eventually settled in Wellesley, MA where they raised their four wonderful children.

Carol was a community activist and advocate for funding Metastatic Breast cancer research. She founded the Wellesley Turkey Trot and was founder and president of Carol’s Corner Foundation and the Vintage Vogue Runway for Research. In total she has raised over $600,000 for her designated MBC Fund at Dana-Farber as well as local non-profits such as Boston Children’s Hospital and many local education and healthcare non-profits. Despite her challenging diagnosis she thrived as a member of our community, selflessly dedicating her life to fundraising and spreading awareness.

She was a beacon of light and a positive force in the community, encouraging others to run and to always be inclusive.Through her love of friendship, humor, and running Carol fostered a better sense of community in Wellesley, encouraging people of all athletic abilities to find strength, support, and friendship in one another. Carol had a great sense of humor, always quick to joke, and had a kind word for everyone. Carol believed in the words of Stuart Scott, When you die, it does not mean you lose to cancer. You beat cancer by how you live, why you live and the manner in which you live.

In compliance with COVID-19 guidelines, visiting hours will be held at the George F. Doherty & Sons Funeral Home, 477 Washington St., (Rt.16) WELLESLEY, Thursday, Aug. 6 from 4-8pm. Relatives and friends kindly invited. A private funeral service will be held in the funeral home on Friday, Aug. 7.