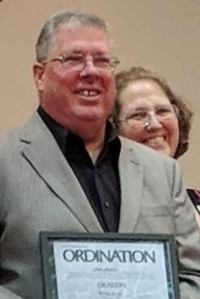 Peter Damian Roberts, 58, of Tifton passed away Sunday, August 2, 2020, at Tift Regional Medical Center. His funeral service will be held at 11:00 a.m. Wednesday, August 5, 2020, at Victory Baptist Church in Tifton with the Rev. Jay Kimbro and the Rev. Dan Eidson officiating. Mr. Roberts will be laid to rest at a later date. The family will receive friends at the home of Debby and Charles Mullis, 2145 Deer Run Circle in Tifton.

Justin Cook will serve as an honorary pallbearer.

Born April 5, 1962 in Pontiac, Michigan. Mr. Roberts was the son of the late Gerald J. Roberts Sr. and Mildred Christiansen Roberts. He was also preceded in death by one sister, Jan Perry. He was a heavy equipment operator with the Tift County Road Department for fourteen years. He was also a member of Victory Baptist Church in Tifton for fifteen years, where he served as a deacon and was involved in the children’s ministry. He loved to spend time with his grandchildren and he loved to fish. Mr. Roberts loved telling anyone he could about the word of God and that they accept Him into their heart as their Lord and Savior. He was also a Chaplain at the Truck Stop Ministry.