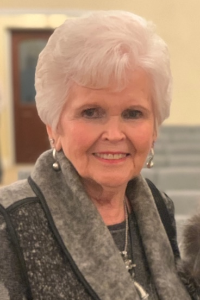 Norma Raines McCall of Ashburn departed this earthly life on Sunday, August 2, 2020 at Tift Regional Medical Center in Tifton, Georgia. A graveside service will be officiated by Reverend Jerry Cooper on Wednesday, August 5th at 10:30 a.m. at Rose Hill Cemetery in Ashburn, Georgia. A private celebration of life will be held later at the First United Methodist Church of Ashburn. While there will be no formal visitation, guests may pay respects from 2-5 p.m. on Tuesday, August 4th at Perry Funeral Chapel in Ashburn.

Norma or as her grandchildren affectionately called her, “Meme,” was born on October 28, 1934 in Thomaston, Georgia to the late Annie Mae Moore Martin and Woodrow Martin. She had a twin brother, Nolan. She married the late Dent Raines, on August 8, 1954 in Wrightsville, Georgia. A few short years later they moved to Ashburn, Georgia where she was a resident for more than 60 years and raised her family of four daughters (Sherry, Sandra, Sheila, and Susan) and one son (Scotty). She and Dent enjoyed 55 years together. After being widowed for three years, she met and married Robert “Bob” McCall. They enjoyed seven wonderful years traveling the country and baking together.

After earning her cosmetology degree in 1969 from Albany Technical College, she began a passion-driven career as a hair dresser. When customers went to see Norma, they gained more than a haircut or perm, they also gained a friend. For over half a century, she was immensely dedicated to building self-confidences and relationships! Everyone knew at “the shop” they would exchange life stories and share advices.

While she kept a full work schedule, she made time for friends and loved to have fun! She was an active member of the First United Methodist Church of Ashburn where she was engaged in Sunday School and the United Methodist Women. She was quick to join the birthday club for luncheons, gather for a community card game, and/or host dinner guests or dinner parties. You may find her heading to a show or traveling the country, but she would quickly make a pit stop for a hot donuts sign, Firehouse Subs, or S&S Cafeteria. She was passionate about music and dancing and in her earlier days you might even find her cutting a rug at the VFW in Albany.

If a lady’s class was measured by her number of shoes, well, she was at the top of her class! She loved style and clothing. As a matter of fact, she was quite the seamstress! As a young parent she searched the magazines for the latest styles, selected local fabrics, and made clothing for her children and even their dolls! Not only was she always dressed to a “T”, she also had every outfit uniquely customized with jewelry and accessories. On very rare occasions would you catch her without her lipstick and flawless makeup.

One of her favorite sayings was “Pretty is as pretty does.” Meme did so many pretty things! In fact, she was without question beautiful. She was known across county lines for her delicious cakes of caramel, chocolate “thin layers,” coconut varieties, and more! She was a fantastic cook and loved to impress others by sharing her delicious dishes. She also planted beautiful flower beds and shared her trimmings. Her sweetness was known in her dishes and her actions.

Without question, she was patriotic and exercised her right to vote, but she also quickly counseled about politics! Perhaps her greatest regret is that she won’t have the opportunity to vote in the 2020 November election for Trump.

She was quick to prioritize her family and cherished time spent with her grandchildren and great-grandchildren. “Meme” would arrange trips for the family. Great-grands affectionately recall trips to Disney World and shows at the Comedy Barn in Pigeon Forge. She delighted in playing cards with the grands (and sometimes giving the grandsons advice to keep them out of trouble), face-timing with the great grands, painting fingernails, enjoying ice creams, or just singing lullabies. She was cherished deeply and will be missed dearly.

Norma’s twin Nolan also passed away at the age of 85. She was preceded in death by Dent Raines and Robert “Bob” McCall and her brothers Nolan Martin, Harold Martin, and Charles Martin.