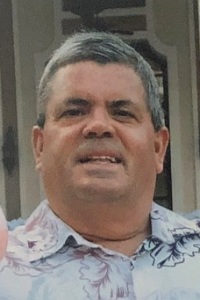 
John T. “Jack” Mias, 63, of Oxford, formerly of Worcester died Tuesday, July 28th in UMASS Memorial Medical Center. He leaves his wife of 36 years, Nancy (Perry) Mias; “his girls” Maggie J. Mias and Bridget N. Mias both of Oxford; two brothers, James Mias and his wife, Robin of Leeds and Jeff Mias and his wife, Lynne of Worcester; two sisters, Jody Venable and her husband, Andrew of Georgia and Julie Parenteau and her husband, John of Spencer and many nieces and nephews. He also leaves extended family and friends including Stephen and Barbara McGurn of Charlton. He was predeceased by his very special brother in law, Dennis Perry who was like a brother to Jack.
He was born in Worcester the son of Dennis and Nancy (Dowd) Mias. Jack graduated from St. John’s High School Class of 1975 where he played football and captained Baseball. Retiring in 2019, Jack worked for 34 years as a crew leader and lineman with National Grid. He was a former member of Our Lady of the Angels Church, the former Worcester Elks Lodge 243 and a member at Blackstone National Country Club. He was an avid golfer who enjoyed participating in golf leagues and tournaments as well as softball leagues and tournaments. Mr. Mias was an outdoorsman who took great pride in his yard and everything he did.
Jack favorite pastime was spending time with his family. He lived for “his girls”. He was the happiest when he was watching his girls Irish Step Dance or playing sports. Florida, Cape Cod, Hampton Beach, spring training, Saratoga Race Track, the Bahama’s and the Caribbean are a few of the places Jack enjoyed traveling to with his wife, Nancy. He enjoyed listening to music and attending concerts.
His funeral is Tuesday, August 4th with a Mass at 10:00 AM in Our Lady of the Angels Church, 1222 Main Street, Worcester (please go directly to church). Burial will be private and at the convenience of the family. Calling hours are Monday, August, 3rd from 4:00 until 7:00 PM in O’CONNOR BROTHERS FUNERAL HOME, 592 Park Avenue, Worcester. Jack left a legacy of kindness. In lieu of flowers that family asks that you be kind to and look out for one another.
Social Distancing and the use of face masks that cover the nose and mouth will be part of the protocol at all of Jack’s services. The family would like to express their gratitude to everyone who has reached out to them. Those that are not comfortable attending services please visit Jack’s guestbook to share your memories or stories at oconnorbrothers.com.