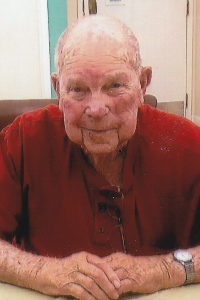 Orville Leroy "Bud" Wood, formerly of Anderson, passed away, Tuesday, July 28, 2020, following a brief illness, at Lake City Place, Warsaw, IN.
He was born January 4, 1928, the son of John William Adolphus Wood and Sarah Catherine (Knotts) Wood. He graduated from Anderson High School.
Bud was a veteran and served with the United States Army in Korea right after World War II.
He was Assistant Fire Chief under Mayor Ferguson, and years later retired from the Anderson Fire Department. He was very proud of being a firefighter. He also retired form Delco Remy Plant Security in 1987.
Bud had many passions in life. He really loved politics. He worked as a precinct committeeman and Madison County Democrat Chairman during Mayor J. Mark Lawler's administration. Bud served as chairman of the Board of Works. He enjoyed going to Rock Lake with his wife, Vera, where they fished and played cards with family and friends. Dancing was another activity they enjoyed together. Every summer, he had a garden full of vegetables and he enjoyed cooking for family gatherings.
He was preceded in death by his wife, Vera Marie (Folsom) Wood, his brother, Charles William Wood and his parents.
He is survived by his son, John Wood (Kim Leach Wood); sister, Patsy (Wood) Spencer; grandchildren; John Merrill Wood, Jennifer (Danny) Rhodes, Amanda Moore, Dean Moore, Whitney (Stacy) Winters; great grandson, Stephan Winters; brothers-in-law, Alvin and Calvin Folsom; sisters-in-law, Fran and Alice Folsom; several nieces and nephews and special childhood friend, Emely Isenhower.
Due to the corona virus, services will be for immediate family only, with a celebration of Life at a later date.
In lieu of flowers, make donations to First Christian Church; 115 Park Ridge Drive; Warsaw, IN 46580.
The family would like to extend a special thank you to the caregivers at Lake City Place and Harbor Light Hospice for their loving care.
Rozelle-Johnson Funeral Service handled the arrangements.
Post online condolences at www.rozelle-johnson.com.