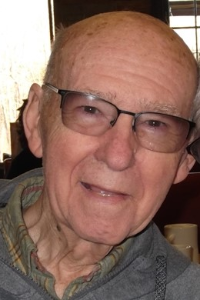 William Lee Paull, 84 of Bellingham, MA. Long-time resident of Canton, MA. Son of William C. Paull and Audrey Paull (Lamb) of New Bedford, MA. Bill was born in Fairhaven, MA and grew up in the whaling city of New Bedford.
After marrying his high school sweetheart Virginia in 1959, Bill served in the Army for four years, during which time he lived in North Carolina and Texas. He attended Northeastern University’s School of Engineering. His affinity for science and technology kept him busy when he was not working, teaching photography and astronomy to adults in the evening at Canton High School. His drive to gain an ever-increasing body of knowledge related to technology was evident in his basement.
After retiring, Bill volunteered at the Museum of Science in Boston for 15 years, where his curiosity and wonder of the universe was piqued. Bill is survived by his wife Virginia Paull (Schenk), his daughter Lorieann Dickson and her husband James of Franklin, MA, his daughter Beth Curley and her husband John of Holliston, and seven grandchildren.
A private service for Bill’s immediate family will be held on Thursday, July 30th. In lieu of flowers, a donation may be made in Bill’s name to Boston Museum of Science, Advancement Department, One Science Park, Boston, MA 02114 or Old Colony Hospice, 321 Manley Street, West Bridgewater, MA 02379.
Arrangements are under the care of the Ginley Funeral Home of Franklin (www.ginleyfuneralhomes.com).