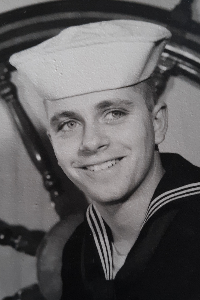 Bob is survived by his wife, best friend, and first mate of 61 years, Susan “Sue” (Johnson); his daughter Julie and husband Gary Robillard of South Yarmouth, MA and his son Jeffrey and wife Laura (Cahaly) Ristaino, and grandchildren Timothy, Lindsay and Christopher Ristaino of Boxborough, MA. Bob is preceded in death by his parents Henry and Marian (Ames) Ristaino of Franklin, MA and many aunts, uncles and cousins.

Bob was born May 4, 1936 and grew up in Franklin, MA surrounded by family. He graduated from Dean Jr. College where he met his future wife. They married on October 26, 1958, after which he served as a radar operator on the USCGS Castle Rock, mainly off Greenland for two years.

After returning from the Coast Guard, they lived in Hartford, CT for several years before moving to Framingham, MA where they started their family and he began a 35+ year career with New England Tea & Coffee, Co. in Malden, MA. Starting as a salesman, he retired as the Senior Vice President of Sales. He was active in several hospitality organizations including the Massachusetts Restaurant Association and the New England Ice Cream Association. The consummate salesman, he was often found holding court during the annual New England Food & Restaurant Show in Boston.

Bob had two loves, his family and the ocean. He was an avid fisherman and boater, he was truly in his element when on the open seas.

To know Bob was to like him. He was a caring and kind soul and people were naturally drawn to his outgoing and warm personality. He had an amazing sense of humor and could light up a room with his many one-liners.

In lieu of flowers, a donation in Bob’s name may be made to the Alzheimer’s Association in Waltham, MA.

Face coverings and social distancing will be in place during calling hours.