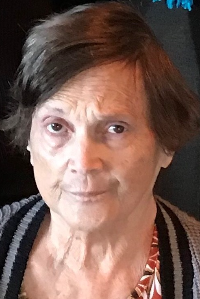 Evelyn Darleen Bazemore Roberson, 79, passed away on July 25, 2020. She was born November 1, 1940, in Tifton. Her parents were the late Latrelle Bazemore Squires and the late Joseph M. Bazemore.

Darleen was a graduate of Valdosta High School where she played basketball. She received her training in Nursing in Fitzgerald and was employed by Phoebe Putney for many years. Darleen was compassionate and kind; those are two attributes that a truly good nurse would possess. Along with her exceptional nursing skills, Darleen always had a smile on her face. She also enjoyed outdoor sports and the beach.

In addition to the deaths of her parents, Darleen was preceded in death by her son, Rodney Roberson. Darleen is survived by her son, Terry Hilton (Rita), and her daughter, Kay Hilton, along with three grandchildren, Terry Hilton Jr., Justin Hilton and Josh Hilton; ten greatgrandchildren, Makenzie, Elabella, Kelsie, Evelyn, Dalys, Jasper, Kayden, Skyler, Riverlyn and Ezabella; two sisters, Gail Griffin and Diann Petrovich. Family was an important part of her life.