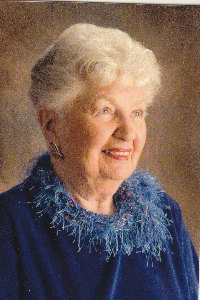 Jacqueline (Knott) Taylor, 96, of Anderson, passed away on July 22, 2020, at St Vincent's Hospital after an extended illness.
She was born July 4th, 1924, in Toledo Ohio, to Arthur and Marie Knott.
Jackie found her passion early in life. As a little girl, she nursed her pets and dolls back to health and went on to earn her nursing degree at Toledo School of Nursing in 1946. The following years, she practiced brain and cardiac surgery at Toledo Hospital, which is where she met her husband, James. She also served as a Rosie the Riveter during World War II, building B24 bomber airplanes.
Throughout motherhood, she practiced all different kinds of nursing, but heightened her passion when she became a traveling school nurse for Madison County, and later a school nurse for Highland High School in Anderson. Caring for children was the highlight of her career.
Jackie was an avid athlete in water and snow skiing, swimming, hiking and biking. Later in life, she found a love for dance. She became a competition ballroom dancer, competing until the age of 90.
Her social joy was contagious and her love for her children and grandchildren was inspiring. She will be missed by many.
She was preceded in death by her parents Arthur and Marie, and many other family members and friends.
She is survived by her two sons, Jeffrey (Susan) Taylor of Melbourne, Florida, and Jay Taylor of Cocoa Beach Florida; her daughter, Jennifer (David) Zur of Littleton, Colorado; grandsons Jeffrey, Steve, Chris, Cody and Michael; her best friend Jeanne Rains of Santa Fe, New Mexico.
In lieu of flowers, donations can be made to the American Alzheimer's Association or First Presbyterian Church of Anderson.
Due to coronavirus, services are pending and will be announced at a later time.
Post online condolences at www.rozelle-johnson.com.