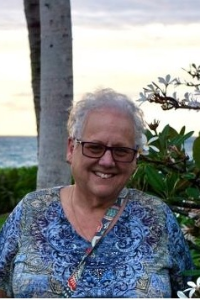 Cathy (Dunn) Orebaugh, 72, Anderson; passed away July 19, 2020 at Ascension St. Vincent Anderson after a short battle with Anaplastic Thyroid Cancer.
Cathy was born in Anderson on June 18, 1948 to James and Maxine Dunn and resided in Anderson her entire life. She married Samuel Orebaugh on May 6, 1971. She was a graduate of Highland High School and Anderson College. She was a member of Central Christian Church in Anderson where she was involved in the Women’s bible study and prayer group.
Cathy retired after more than 25 years from the Madison County Division of Family and Children Services. After retirement, she was an active volunteer serving in the box office at The Alley at Central Christian Church and Mainstage Theatre, and as a member of the Ascension St. Vincent Victoria Guild where she volunteered in the gift shops. She was also a member of the Anderson Soroptimist Club. She loved to cruise with her daughter and family and made several extended trips to Hawaii to visit with her son and family.
Cathy is survived by her 8 Js: daughter Jayna (Jason) Friend of Anderson; son Jesse (Jenny) Orebaugh of Makaha, Hawaii; and grandchildren Jesse, Jordyn, Jonathan, and Journey. She is also survived by her brother Daniel (Cathy) Dunn of Middletown, sister Amy (Randal) Saathoff of Alexandria, and sister-in-law Kris (Bill) Caylor of Chesterfield; and several nieces, nephews, cousins, and many close friends.
She was preceded in death by her husband, Sam Orebaugh, and her parents.
Funeral services will be held on Wednesday, July 29, 2020 at 10am at Central Christian Church in Anderson with Rick Vale officiating. Burial will follow at Bronnenberg Cemetery in Chesterfield. Visitation will be held on Tuesday, July 28, 2020 from 4-7pm at Rozelle-Johnson Funeral Service. Because of Cathy’s love for Hawaii, the family will be wearing Hawaiian attire for the funeral.
In lieu of flowers, the family requests that memorial contributions be made to The Alley Theatre Company, Central Christian Church, or Anderson’s Mainstage Theatre.
Post online condolences at www.rozelle-johnson.com.