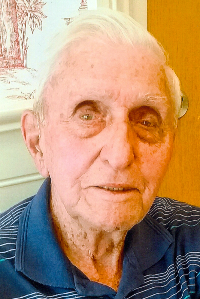 Mr. Justin J. Doucette Jr. of Woburn formerly of Whitman passed away Thursday, July 16, 2020. He was 96 years of age. Justin was the beloved husband of the late Rae (Apt) Doucette. Born in Peterborough, NH he was the son of Justin and Antionette (Allen) Doucette.


Justin was raised and educated in Dorchester. He was a proud United States Army Veteran of WWII and honorably served as a Corporal with the 266th Engineer Combat Battalion until his discharge in 1946. When he returned home he soon married his beloved Rae and the young couple moved to Whitman and then eventually settled in Woburn in 1967. Justin worked as a talented machinist for his whole career and retired as a supervisor from the Grindco Company of Chelmsford where he worked for many years. Together Justin and his wife Rae spent many wonderful retirement years in Myrtle Beach, South Carolina. He was very active for a period of time with the V.F.W. of Whitman. He enjoyed participating in many different events there and was a champion horse shoe player and a great bowler. In his leisure time he also enjoyed working on puzzles.


Justin's greatest joy was his family and he especially cherished spending time with his grandchildren and great grandchildren. He loved having the kids over on Saturday mornings so he could cook them breakfast and spend some special time them. Justin will also be missed by the many friends he had at the Woburn Housing Authority Campbell St. Apartments where he lived.


Due to the current health pandemic and in keeping with Justin’s wishes funeral services will be private. It has been requested that in lieu of flowers contributions may be made in Justin’s memory to Honor Flight,Box L-4016,Columbus, OH 43260-4016. Arrangements by the McLaughlin - Dello Russo Family Funeral Service of Woburn.