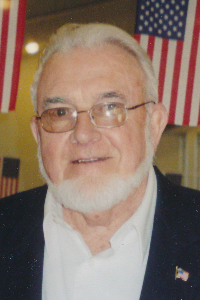 
Bud was born and raised in Maine. He graduated from Jackman High School and married his high school sweetheart,
Vivian (Wilson) Talpey. They lived in Alabama while he served in the Army from 1951-1953.They moved to Massachusetts
where he became a respected self-employed carpenter, making custom homes on the South Shore. Later, Bud was Whitman's Building Inspector, and then Building Inspector for the town of Duxbury. He retired in 1991 after 4 years of working as the Superintendent of Buildings and Maintenance for Plymouth County.

For many years, Bud was a dedicated citizen of Whitman. He was an active member of First Congregational Church UCC serving many roles. He was Scoutmaster of Troup 59 Boy Scouts, Worshipful Master and 32nd degree of Puritan Masonic Lodge, and president of Whitman Lions Club. Over the years he served the town as a member of the School Committee, Chairman of the Finance Committee, and as a Selectman.

Bud was a well-known and award-winning bird carver, and enjoyed teaching others his craft. He was a member of Strawberry Valley Golf Association, and enjoyed archery, fishing, and hunting. He made many friends at High Pond Estates in Bridgewater, and more recently spent hours every day painting canvases of wildlife, lighthouses, and portraits.

A public graveside service will be held Monday, July 20th at 11 am at the High Street Cemetery on Pine Street in Whitman.