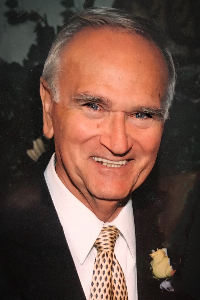 Phillip C. “Phil” Salvucci 91, of Franklin, died peacefully, Friday July 3, 2020 at Countryside Healthcare in Milford, following a long illness. He was the beloved husband of Martha L. (Farnham) Salvucci, with whom he shared 70 years of marriage.

Born April 18, 1929 in Waltham, a son of the late Joseph and Alice (Simas) Salvucci, he was a longtime resident of Plymouth and Franklin.

He was raised and educated in Brighton and worked for the Boston Region of Chevrolet Motor Division in Westwood, where he held several senior management positions over a 32-year period.

A proud American he served in the United States Marine Corps during the Korean War, he attained the rank of Corporal and was honorably discharged in Sept. 1951.

Phil was devoted to his family and was involved in the Franklin Pop Warner program for many years.

He was the brother of the late Robert and Carmin Salvucci.

Relatives and friends are invited to attend his funeral Mass Tuesday July 7th, at 11AM in St. Mary’s Church, Franklin.

Interment with military honors will follow at the parish cemetery.

Calling hours are Tuesday from 9-10:30AM in the Charles F. Oteri and Son Franklin Funeral Home 33 Cottage St. Guestbook/directions www.oterifuneralhome.com

Due to Covid-19 (Coronavirus) face coverings and social distancing will be in effect at the funeral home and church.

In lieu of flowers, donations in his memory may be sent to: The SSG Matthew A Pucino Memorial Foundation., 56 Siasconset Dr, Sagamore Beach, MA 02562 or thru matthewpucinofoundation.org