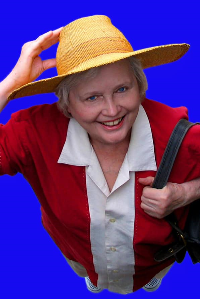 Born “the second baby in Medford” just after midnight, New Year’s Day of 1931, she regretfully missed a cash prize and supply of cloth diapers made all the more precious amid the Depression. Arriving a wee bit late soon became a trademark, as did her obsession with sweepstakes and raffles. Eileen graduated from St. Clements High School, Medford, and The Chandler School, Boston. On her first day as a secretary at New England Telephone Company, she met Simon J. Donovan of Winthrop, MA. Unbeknownst to her, and upon first sight, he bet a friend he would marry her, and soon did. While raising their seven children in Winchester, MA, she became a familiar and compassionate face as the long-time Emergency Room secretary at the Winchester Hospital, a role that called for as much calm amid chaos as did her role as mother of a large brood. Eileen thrived best amid activity and tumult. She was known as a keen observer of human behavior, a natural artist, a caregiver, a collector and teller of stories, a fierce friend, a thrift store and lottery ticket enthusiast, a keeper of family memory as well as any secret ever told to her, and a lover of laughter, especially among gatherings full of family. No one ever left her home without words of advice—usually in the form of instructions.

Daughter of the late James and Anne (Roche) Meagher, sister of the late Thomas Meagher, of Lynn, and late James Meagher, of Winchester, she grew up with strong Democratic Socialist values which she held her whole life. Inspired by her Irish immigrant parents, a union organizer and former midwife, respectively, she forever after lived a life attuned to equity and social justice. These values Eileen transmitted to her children and grandchildren, often involving them in political campaigns. Her children remember being kept awake by the IBM Selectric typewriter that often blazed into the night with her letters of advocacy to legislators. In every way possible, Eileen used her voice to counter oppression and inequality, and modeled those stances to her children. She was always attuned to the cries of children and the poor. In this season of hardship, please consider donating to a local foodbank in Eileen’s honor. Services and burial will be private. In lieu of a raucous Irish wake that she would have loved, out of pandemic concerns, a celebration of her life will be held at a future date.