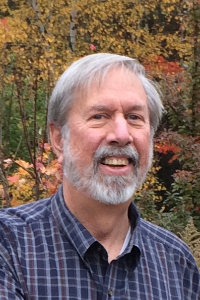 David worked as a US Postal Serviceman for 20 years. Dave had a gift for conversation and a sense of humor that helped him connect with people. He worked as a window clerk for the USPS and served for a time in the busy Laconia Lakeport location which had both drive-up and walk-in service.

He was a member of the Harvest Church of the Lakes Region and Center Harbor. David loved the Lord Jesus Christ and had many passages of scripture committed to memory.

David was an avid hiker and backpacker. If you have ever hiked Red Hill in Moultonborough, you have probably seen Dave on the trail. He hiked there frequently, year-round in preparation for backpacking trips every summer. He authored the book Backpacking with God in our National Parks.

Dave never lacked for something to do in retirement. He enjoyed the NH outdoors, kayaking and snowshoeing. He loved to work and beautify his property. He was known to go on walks along the local roadsides picking up trash and recyclable containers. He called them “ATP” walks — “after the pigs.” He liked to drive up to a place where the Appalachian Trail crossed the road and set up a stand with fresh fruit or other snacks to give to hikers — a trail “angel.” A good game of “Settlers of Catan” was a regular thing with his sister, Diane. Dave and his good friend, Chuck Watson, loved to have friends over for dinner on the deck, watch a movie or cheer the Patriots or Red Sox to victory. In recent years he reached out to neighbors with an annual "Reach the Beach" support party.

Dave was recognized with the Holm Award by the National Weather Service for his dependable 25 years of volunteer meteorology record keeping.

Burial will be held at the New Hampshire State Veteran's Cemetery, in Boscawen, NH, at a later date.

Wilkinson-Beane-Simoneau-Paquette Funeral Home & Cremation Services, 603Cremations.com, 164 Pleasant Street, Laconia, NH, is assisting the family with the arrangements. For more information and to view an online memorial go to www.wilkinsonbeane.com.