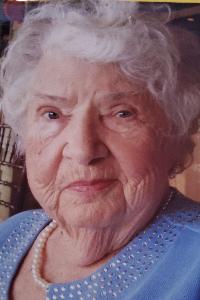 GILFORD---The beautiful spirit of Mildred K. Dowse (Dobbins), 95, returned to her heavenly origins on June 14, 2020, while surrounded by her loving family at her home in Gilford.

Mildred, or “Mod”, was the adored centerpiece of a large family – a true grand matron leading through the power of love. She was a nurturing mom, devoted grandmother (Nana), and a loving great-grandmother. Her love, life lessons, and influence will live on through her children and their families as well as all who were blessed to have known her. The world is different now without her, but has been made better by her.

Mildred had boundless energy – as many early morning phone calls to family and friends made clear. In addition to tending to her big family, she operated her own dress shop, a country store, and was involved in community theatre. She also became a licensed realtor, managed her own real estate firm for many years, and served in a leadership position on the Concord Board of Realtors.

For most of her life, Mildred was a fun-loving, card-playing, dancing machine with a mystical way of getting folks to do exactly what she wanted them to without ever actually saying a word. Her sparkling blue eyes, caring heart, and quirky sense of humor made her “that person” that everyone wanted to be with.

She quickly became a social icon of every community she lived in. Mildred was known for hosting the best parties for family and friends, the grandest socials for community organizations, and for coordinating impressive business events. Her demand for excellence and precision delivery of an event’s itinerary made her a force to be reckoned with for sure.

Despite seven children and other interests, Mildred found the time and energy to help others less fortunate. She volunteered in many community efforts and occasionally provided meals and temporary respite care for some homeless and orphans in her already crowded home.

During her retirement years, she spent winters in Florida and loved the beaches and playing cards with friends. She never saw a scratch ticket that she could resist purchasing, could manually handle more bingo cards than even the most powerful digital bingo processor, and had a automatic setting in her VW bug that brought her to Foxwoods on a regular basis during summers in Gilford.

Mildred’s father came to America from Sweden at a young age and her mother came to America from Norway at a young age. Those two young people independently found their way to Watertown, Massachusetts, where they met and ultimately married. Her connection to her heritage, particularly to Norway, was kept alive throughout her life. Mildred, and several of her children, made many trips to Norway and hosted Norwegian family in America. On her ninetieth birthday, she was declared “the American Queen of Norway” by a Norwegian family representative attending the event.

Mildred –and her two husbands who each served in the military – loved America and its ideals. Each was a member of what has been called “the Greatest Generation”, as a result of the significant contributions and sacrifices made to sustain and perpetuate our nation. As these souls pass and leave that effort to all who remain, let us honor them through our own contributions and sacrifices.

Mildred was born to the late Signe and Arthur Johnson of Woburn, MA. She was married to the late Warren Dobbins of Woburn and moved to NH early in their marriage where they raised their 7 children.

Mod is survived by her seven devoted and loving children and their families, Warren Dobbins and Judith Stanley of Pembroke; Marsha and Robert Bisson of Richmond, RI; Sharon and Peter Beauchesne of Canterbury; Bruce and Lee Dobbins of Meredith; David and Jean Dobbins of Gilford; Kris and Betty Dobbins of Easton; Kurt and Sharon Dobbins of New Castle, and by her grandchildren, Jamie Beauchesne, Keith Dobbins, Katie Dobbins, Kerri Howard, Joshua Dobbins and Sabrina Dobbins, and great-granddaughter, Charlotte Howard. She also leaves her sister, Ruth Sigvardson of Plymouth and brother, Roy Johnson of Woburn, MA, 2 stepdaughters, Denise and Tracey Dowse of Los Angeles, CA, and many nieces and nephews.

She was predeceased by her second husband, Navy Captain(retired) Herbert B. Dowse II and her brother Earl Johnson.

Her family will be honoring her at a private Celebration of Life.

Wilkinson-Beane-Simoneau-Paquette Funeral Home & Cremation Services 603Cremations.com, 164 Pleasant Street, Laconia, NH, is assisting the family with the arrangements. For more information and to view an online memorial go to wilkinsonbeane.com.