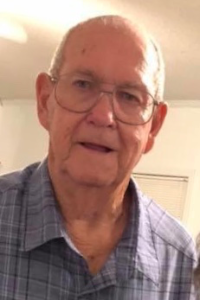 Kenneth Pearson, 80, of Enigma passed away Wednesday, July 1, 2020, at his residence. A graveside funeral service will be held for Mr. Pearson at 11:00 a.m. Saturday, July 4, 2020, at Turner Primitive Baptist Church Cemetery in Berrien County, where he will be laid to rest. The Rev. Shaun Suggs and the Rev. James Irons will officiate.

Born October 30, 1939 in Columbus, Mr. Pearson was the son of the late Ben A. Pearson and Mamie Bertha Alexander Pearson. He was also preceded in death by his wife, Vivian Harris Pearson, who passed away May 28, 2020; one daughter, Teresa Pearson Suggs; and one sister; Mamie Frances Pearson. He was employed at Shaw Industries for 31 years of service. He was a member of the Enigma Volunteer Fire Department and a former member of the Enigma City Council. He was also a member of Barnes Chapel in Berrien County.

Mr. Pearson is survived by one son and daughter-in-law, LaDon “Donnie” and Laurel Pearson of Enigma; three daughters and sons-in-law, Connie and Jim Fristad of Villa Rica and Betty and Tim Crews and Jeannine and Stacy Harnage, all of Nashville; one brother and sister-in-law, Bobby and Lois Pearson of Jacksonville, North Carolina; two sisters and brothers-in-law, Carolyn and Harvey Harris of Orlando, Florida and Marcel and Lannis Harrell of Cairo; numerous grandchildren and great-grandchildren.