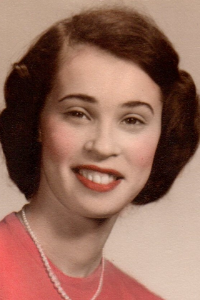 Elaine C. Quinn, 84, of Bedford, NH, and formally of Sandown, passed away unexpectedly at home on June 29, 2020. She was a spring baby, born in Everett, MA to the late Jacob and Anne (Kepnes) Green. Elaine grew up in Chelsea, graduating from Chelsea High School in 1954. In 1958, she met Roy Quinn at a dance held at the YMCA while he was on liberty from his ship. They married the following year on August 7, 1959. Her full-time job became that of dedicated wife, mother, and homemaker, raising two girls and two boys. Once her children were grown, Elaine held a variety of part-time jobs, including cashier at Perino's in Sandown, kitchen prep at Timberlane Regional High School, and babysitting, eventually retiring in 2002 from the Granite Rose in Hampstead.

Many will remember Elaine for taking the time to acknowledge a birthday or illness with a card, as well as sending thank-you notes expressing appreciation for gifts and other acts of kindness shown to her. She was known to be a great conversationalist and listener who showed a real interest in what people had to say.

A private graveside service was held July 2 in Center Cemetery in Sandown. In lieu of flowers, memorial contributions may be made to the American Heart Association or your local SPCA.