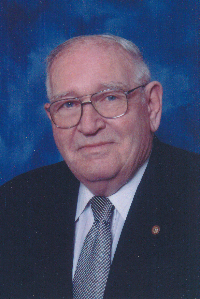 Robert E. Godbout, Sr., passed away peacefully on June 25th at the age of 92 at the South Shore Hospital in Weymouth after a long illness. Bob was born in Brockton, MA in 1928 and was raised in Whitman where he married his high school sweetheart Dorrace, in 1945. Together, they celebrated 60 years of marriage before Dorrace predeceased him in 2005.

Bob was a graduate of Whitman High School in 1945 and after graduating he began a 28-year career with the US Postal Service in which he held many positions. He was an RFD letter carrier in Whitman and East Bridgewater through the 1980’s and would continue to amaze people with his memory of street numbers, family members, and family histories of everyone on his various routes for many years following his retirement.

One of his proudest accomplishments came when he co-founded Whitman Trophy Co., Inc. with his son Bob Jr. in 1968. Together they tirelessly built a respected trophy and awards business over the course of fifty years where together they developed a reputable and respected service in the community. Bob continued to remain active with Whitman Trophy well into 2020.

In his younger years, he enjoyed hunting and fishing with friends at his camp in Maine. For over 50 years Bob was an active member of Freemasonry where he served as Worshipful Master of Puritan Masonic Lodge, A.F & A.M. in 1959. In recognition of many years of honorable and faithful service to his fraternity, he was awarded the Meritorious Service Award in 1986, and the Veteran’s medal in 1999. He was a member of the Scottish Rite Masonic Bodies in Boston, MA and was the Director of the Work for the Princes of Jerusalem. His contributions to the craft extend to Aleppo Temple Shriners where he served as President of the South Shore Shrine Club, and in 1962 he served as Worthy Patron in The Order of Eastern Star with his wife Dorrace. In 2008, he was recognized with one of the highest honors in Freemasonry by being honored with the 330.

His visitation and funeral services will be private. The public is welcome to his graveside service, the public should be at the Blanchard Funeral Chapel, Plymouth Street (Rte. 58 at the rotary circle) Whitman, on Thursday July 2nd at 11:00AM, to line up and go in procession to the Northville Cemetery, East Bridgewater for his Masonic service at graveside.