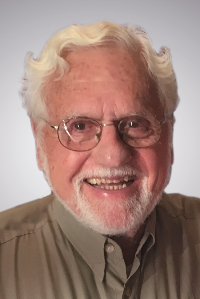 John Malcolm Schloss Jr. 87, of Stonington, died peacefully at home on June 25 surrounded by loved ones. Born Dec. 11, 1932, in NYC, he was the only child of John Malcolm Schloss Sr. and Vera Viva Klopman Schloss (stage name Vera Allen). He was the husband of loving wife Janet McCaffrey Schloss and is survived by: his daughter Margaret Allen Schloss Hennessey, of Kingwood, TX , her husband William S. Hennessey, their children Mariel, Sean and Bill Jr. and his two sons; and also by his daughter Mary Ellen Schloss of Scituate, MA, her husband Thomas S. Robotham and their sons James and Chris.

John attended Cheshire Academy in CT and Cornell University where he majored in economics and was a member of the glee club, the drama club and the rowing team. John was enrolled in ROTC and after college served as a Lieutenant in the Army following a short stint as a page at NBC Studios. For over two decades he worked for JC Penney in NYC, rising to Sr. Vice President of merchandising. He concluded his career at Henry I. Seigel, also in Manhattan.

After raising his family in Douglaston, NY he returned to Mamaroneck, NY where he had spent most of his youth and early working and sailboat racing years. He joined the Larchmont Yacht Club and was a member for twenty-five years. In retirement, John settled in Noank, CT, and over the past twenty years has been so happy to be included in village life and friendships. During the course of his life, John found joy in sailing and travel and in music, art, and painting but he especially loved being surrounded by family and friends. He will be missed by many. Sail on, dear one.

In lieu of flowers, donations may be made to Doctors without Borders/Medecins Sans Frontieres at donations@newyork.msf.org or 1-888-392-0392.

Information on John’s memorial service, to be held in the coming months, will be made available
on this website.