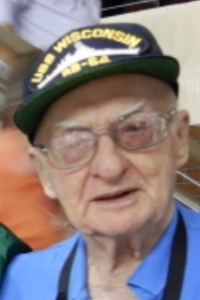 LIMERICK- Herbert William “Bill” Stitson, Sr passed away on June 20, 2020 after a period of declining health.
He was born in Parsonsfield, Maine on April 10, 1930 a son of the late Herbert and Gladys (Watson) Stitson. After graduating from Parsonsfield Seminary, Bill realized a lifelong dream; A long-time baseball player, he tried out for the Boston Red Sox at Fenway Park in the spring of 1950. He was directed to play for a team that the Red Sox supported in Bar Harbor, Maine. He loved reliving this time through the many stories he shared with family and friends. The world intervened in the fall of 1950 when he was drafted to serve during the Korean War. He enlisted in the Navy and served aboard the USS Wisconsin, BB64 for 3 ½ years. On March 15, 1952, while Bill was onboard, the USS Wisconsin was hit by enemy fire off the coast of Korea. He was honorably discharged in 1954 with the rank of Petty Officer, 2nd class. He married Nina Curry while still in the Navy and started their married life in Virginia and living in an airstream camper in Pensacola, Florida. Upon returning to Maine, they purchased a small farm in Cornish, Maine and started raising chickens. Bill worked several jobs after leaving the Navy. He was a furnace technician for several years; he drove tractor and trailer for transportation companies eventually owning his own rig. In 1969, as his son was heading toward teen years, he decided he needed to be home more and went to work for the Maine Department of Corrections as a Corrections Officer. Bill retired from this job in 1990 as a Classification Officer.
After retirement Bill and Nina spent several years travelling and camping in the U.S. and Canada. Bill was very much a family man. He loved family gatherings, spending time with his children, grandchildren, and great-grandchildren. He enjoyed woodworking and loved making things for his family. In later years he developed an interest in genealogy and found a lost branch of his family who lived on Prince Edward Island. Bill and Nina made several trips there and enjoyed getting to know these long-lost relatives.
Bill was a Mason for 68 years reaching the 32nd degree. In recent years, Bill was honored with the title of Mason of the Year. He was a member of the White-Tibbetts Legion Post 55. He was a long-time member of the Massabesic Athletic Booster’s Club and served as President in the mid 1970’s. He served one term on the Limerick Planning Board and was on the Par Sem Board of Trustees. Bill has a room in the Par Sem Dormitory dedicated to him. At the time of his death he was the last surviving student of his class, the last graduating class at Par Sem. He was also a member of the Free Baptist Church in Limerick.
He was predeceased by his brother, Charles Stitson. Bill is survived by his wife, Nina (Curry) Stitson; his children, Mary Jo Burcham and husband Lloyd of Limerick, Cindy Taylor and husband Brad of Albion, Herbert W. Stitson,Jr. and wife Debra of Limerick; his grandchildren, Nicole Soucy and husband Michael, Jessica Carll and husband Nate, Andrew Burcham and Fiancé Leighana , H. William (Bill) Stitson, III and wife Kate, Tim Stitson, Elijah Stitson, Allen Facinelli and wife Chanel, Dean Taylor, Matt Taylor and Chris Taylor; his great grandchildren, Ian Burcham, Mason and Michaela Soucy, Aiden, Aryanna and Finnegan Carll, Avalei and Declan Facinelli.
Bill’s family would like to thank the staff of Seal Rock Health Care and Beacon Hospice for wonderful care of their father.

Visiting hours will be held on Friday July 10 from 5-8 PM at the Poitras, Neal & York Funeral Home, 71 Maple St., Cornish. At 7 PM Masonic Funeral Honors will be performed.
A service amongst Bill’s family will be held on Saturday July 11 at 10 AM at the funeral home. Burial will follow at Highland Annex Cemetery in Limerick. On both days, please be mindful of Reopening restrictions and distancing.

Online condolence messages can be submitted at www.mainefuneral.com.
In lieu of flowers, memorial contributions may be made to the Limerick Fire and Rescue Department, 55 Washington St., Limerick, Maine 04048