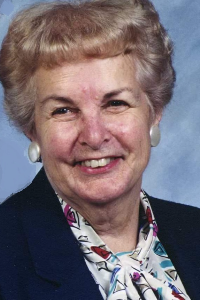 GILFORD-----Corinne A. Sonia, 92, of 4 Cyrus Lane in Gilford, died peacefully at home on Friday, June 12, 2020, after a short illness, following two years of declining health. Born Corinne Mary Arnold on December 14, 1927 in the City of Laconia, New Hampshire to Rexford and Luella Arnold, at the family home, the so-called “Arnold Mansion,” located at 507 Union Avenue in the Lakeport section of the City. She attended St. John’s Catholic School in Laconia until the untimely death of her mother in 1943 when, at age 16, she left school to run the household and care for her younger siblings. In 1952, she began working for New England Telephone Company as a switchboard operator, and was so employed full- or part-time for the next 32 years. She was a member of the International Brotherhood of Electrical Workers Union (IBEW) and the Telephone Company Pioneers retirees group. Her father, Rexford, a longtime employee of Scott & Williams, Inc., died peacefully at the “Mansion” in 1960.

In 1950, Corinne married Roland Albert Brunette, originally from Sanford, Maine, at Our Lady of the Lakes Church in Lakeport. In 1957, Corinne and Roland adopted a four-month-old infant through NH Catholic Charities in Manchester and named him Peter Richard Brunette. He was their only child. She loved to tell the story of how thrilled she felt the day she first held her adopted son in her arms, holding him all the way home from the orphanage to their home in Laconia, and for the rest of her life, often introduced Peter as her “Little Boy,” to their mutual amusement. From 1973 until 1984, she and Roland owned and operated The Schooner Restaurant on Railroad Avenue in Lakeport (now C.J. Avery’s). Roland died of ALS (Lou Gehrig’s Disease) in 1992; Corinne provided in-home care for her husband until shortly before his death.

A lifelong, devout Catholic, Corinne was a member of St. Joseph’s Parish, then Our Lady of the Lakes, and finally St. Andre Bessette. She volunteered for many years at the Our Lady of the Lakes Parish thrift store, the New-To-You Shop, located in the former convent school building on Washington Street. She never learned to drive, so one day in 1996, a friend introduced her to Richard A. Sonia, a handsome widower recently relocated from California to Gilford, New Hampshire, who volunteered to be her driver for her periodic trips to pick up and deliver clothing and other donated items for the New-To-You Shop. His good humor, strength of character and generosity impressed her greatly, and they were married in April 1997. After their marriage, she and Richard resided at his home in Gilford until her death. Their life together was a joy to them both, and they loved traveling and going on drives about town in Richard’s Ford Model A Roadster. Corinne had been in relatively good health all her life, until she became seriously ill in 2018 and required a period of hospitalization, followed by many months of rehabilitation and nursing care at Genesis Laconia Center, where she was a favorite of the nursing staff. Upon her return home in June 2019, she was, by the grace of God and sheer strength of will, able to navigate their tri-level home using a walker, without falling once. Corinne was very lovingly and patiently cared for 24/7 by Richard, with assistance from her son and other family members, until her death. But for him, she would not have been able to live out her final years comfortably at home, and die peacefully in her own bed.

She is survived by her devoted husband, Richard A. Sonia, of Gilford; her son, Attorney Peter R. Brunette, of Lakeport, NH; her brother, Lt. Colonel Preston T. Arnold (U.S. Army, Retired), of Lexington, South Carolina; her devoted former daughter-in-law, Dorothy J. Treisner, Ph.D., of Meredith, NH; her beloved grandson, Jonathan P. Brunette, of Barrington, NH; her stepsons, Bruce D. Sonia ofMojave Valley, Arizona and Craig S. Sonia of Wrightwood, California; and many nieces and nephews. In addition to her parents and first husband, she was predeceased by her siblings Welker G. Arnold, Emmet A. Arnold, and Una G. Arnold.

Adhering to the guidelines of the State of New Hampshire and the CDC, A Calling Hour will be held on Wednesday, June 17, 2020 from 11:00am - 12:00 noon at the St. Andre Bessette Parish- Sacred Heart Church, 291 Union Avenue, Laconia, NH.

Burial will follow the Mass in Union Cemetery, Laconia, NH.

For those who wish, the family suggest that memorial donations may be made to the Lakes Region Visiting Nurse Association, 186 Waukewan Street, Meredith, NH 03253.

Wilkinson-Beane-Simoneau-Paquette Funeral Home & Cremation Services, 164 Pleasant Street, Laconia, NH is assisting the family with the arrangements. For more information and to view an online memorial go to www.wilkinsonbeane.com.