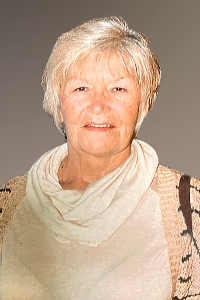 Gilford---Sandy C. Mosbrucker, 74, passed away peacefully on Thursday, June 4, 2020, at Lakes Region General Hospital with family at her side after a short courageous battle with cancer.

Sandy was born in Oxford, England, moved to Canada at the age of 16, and then to Boston. She met the love of her life, Larry Mosbrucker, and they were married on April 18, 1970, and just celebrated 50+ years of marriage.

Sandy was a fun person to be around and enjoyed many long hours making her beautiful crafts and afghans. She absolutely adored her six grandkids and spending time with them. Her oldest grandson Blake, and fiancee Riley, pushed their wedding from September to June 4, after four hours of planning, and were married at Sandy's bedside at LRGH, because it meant so much to them to have her witness the ceremony.

The family will be forever grateful to the ICU staff at LRGH. On top of their regular duties, they helped plan a beautiful wedding, and made a dream come true. Thank you from the bottom of our hearts.

If you wish to honor Sandy, the family requests a donation to the American Cancer Society, Two Commerce Dr. Suite 110, Bedford, NH, 03110.

A Celebration of Sandy's life will be held at a later date.

Wilkinson-Beane-Simoneau-Paquette Funeral Home & Cremation Services, 164 Pleasant Street, Laconia, NH, is assisting the family with the arrangements. For more information and to view an online memorial go to www.wilkinsonbeane.com.