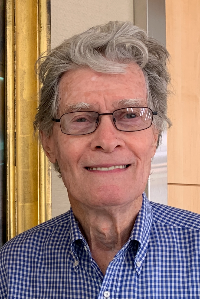 As a preacher and pastor, Parke advocated a tough-minded, biblically grounded, ethically committed liberal religious faith. Born in Buffalo, NY in 1928 and ordained in Peterborough, NH in 1956, Parke witnessed the Great Depression, World War II, nuclear fission, the demise of colonialism, Vatican II, the moon walk, the collapse of the Soviet Union, the emergence of Europe as an integrated and cultural community, and the information revolution. Twice married and twice divorced, he experienced human possibility and human conflict in his own life. As the father of six, grandfather of nine, and great-grandfather of four, he saw the human promise unfold in his own extended family.

As a thinker, Parke emphasized direct experience, personal authenticity, and confrontation with issues. He celebrated contradiction, ambiguity, paradox, and mystery as avenues to truth. World War I was, he held, the defining event of the twentieth century. The Nazi Holocaust revealed heretofore unimaginable depths of human depravity. In contrast, the creation in 1945 of a new international society in the establishment of the United Nations and its specialized agencies gave hope to a war-ravaged world.

The recovery of faith is a recurring theme in Parke’s writings. “For Karl Marx the issue was the class struggle,” he wrote in 1995. “For Susan B. Anthony it was the franchise. For W.E.B. Du Bois it was the color line. For Albert Camus it was suicide. What is the issue for us today?” Parke answered, “The great issue for us as individuals, as a religious community, and as a human generation, is that of faith…. In every land and era parents have faith in their children, military leaders have faith in their troops, orchestra leaders have faith in their horn players. Whatever the object of faith, it is faith that makes possible sustained relationships, families, communities, the world system.”

The second of three sons of Robert and Mary Boynton Parke, David Parke attended the campus school of the State University College at Buffalo and the Park School of Buffalo. He studied at Antioch College (A.B. in History, 1952), the Meadville Theological School at the University of Chicago (B.D., 1955), and Boston University (Ph.D. in American Church History, 1965). Later he served as a trustee of Meadville 1968–74 and of Antioch 1970–76.

As a teenager, David Parke served as continental president of American Unitarian Youth, traveling in 1947 to youth conferences in Czechoslovakia, Switzerland, and England. In professional and family travel he visited all of the lower 48 states and numerous countries.

Parke began his ministry in 1955 in Peterborough, NH. In 1957, when he was 28, the Beacon Press in Boston published The Epic of Unitarianism, his source book of four centuries of Unitarian faith and practice in Europe and America, on which he had started working as a theological student in Chicago. A mainstay in the field of Unitarian historiography, the book is still in print. A Japanese translation was published in 1978. Parke contributed a chapter to A Stream of Light (1975), a short history of American Unitarianism, and edited The Right Time: The Best of Kairos (1982), a selection of articles from Kairos, a theological quarterly Parke founded and edited 1975–83. In 2004, Naming the Holy: Selected Writings of David B. Parke, a special issue of The Unitarian Universalist Christian, was published by the Unitarian Universalist Christian Fellowship in Weston, MA. Parke’s major constructive work is The Children Were My Teachers: The Revolution in Religious Education (Chicago: Meadville Lombard Press, 2009), a lightly edited version of his 1965 doctoral dissertation submitted to the Boston University Graduate School in that year.

As minister in Peterborough, NH, he founded (1958) and served as president of Monadnock Community College, a regional, university-affiliated, adult education institution.

Parke was married to Avis-Ann Strong 1950–1982 and to Marta M. Flanagan 1986–1994. He is survived by a son Richard of Austin, TX; a daughter Robin Melavalin (and wife Diane Hammer) of West Roxbury, MA; a son John (and wife Brett Warren) of Yarmouth Port, MA; a son Edward (and wife Dawn Walnut) of Brewster, MA; a son William (and wife Elizabeth) of Buffalo, NY; and a daughter Alison Melavalin of Centerville, MA; eight grandchildren; and four great-grandchildren. Also surviving are a brother Andrew of Woodstock, IL and several nieces, nephews, and cousins. An older brother, Robert Parke Jr., died in 1998.

A memorial service will be held in Boston at a later date. Burial will be at Forest Lawn Cemetery in Buffalo, NY. Remembrances may be made on legacy.com. Memorial gifts may be made to NAACP, 4805 Mt. Hope Drive, Baltimore, MD 21215 or www.naacp.org.