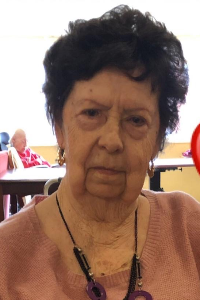 WORCESTER – On Thursday, May 28, 2020 at the Lutheran Rehabilitations and Skilled Care Center, Blanca Morales-Fuentes, 88 was peacefully called to join her Lord Jesus.
Blanca was born and raised in Corozal, Puerto Rico, the daughter of Juan Morales and Leandra Fuentes. She grew up in humble circumstances with extended family. Though she had little formal education herself she worked hard and encouraged her children to pursue higher education. She and her husband Bernardo Olmeda raised their children in Bayamón, Puerto Rico and were proud of their accomplishments.
Blanca was an active member of her church in Bayamón. She participated in the hospital ministry, weekly visiting patients and ensuring both their spiritual and physical needs were being met.
Blanca was known for her generous heart, her dark hair that was natural until the end of her life, her soft voice and calm temperament. She enjoyed music and surrounded herself with flowers.
Through her life Blanca was a fighter. In her late sixties she became a proud member of the “Patitas Calientes Club” walking five miles with her companions.
In 2014 she moved to Worcester to be close to her daughter Ivette Olmeda. As much as a fighter as possible she survived several falls, Parkinson’s disease and dementia. Her battle ended with a stroke caused by the corona virus.
Blanca is survived by her three children, Edwin Olmeda of Puerto Rico, Ivette Olmeda and her husband Ángel M. Colón of Worcester and Bernardo Olmeda of Puerto Rico. She also leaves her grandchildren, Jason Olmeda, Kevyn Olmeda, Ian Olmeda, Erving Colón, Damaris Colón, Stefano Olmeda-Rivera and Sebastian Olmeda-Rivera. She also leaves seven great-grandchilden, Gia Olmeda-Guevara, Jayden Olmeda-Guevara, George Colón, Gabriela Cabán, Sofia Garcia, Kenay and Kennan Olmeda and one soon to be born.
Due to current regulations on public gatherings at this time there will be a two-hour visitation restricted to ten people at a time in Dirsa-Morin Funeral Home, 298 Grafton Street, Worcester, MA 01604 on Wednesday, June 3, 2020from 5:00-7:00pm. Blanca’s remains will then be sent to rest with those of her late husband.