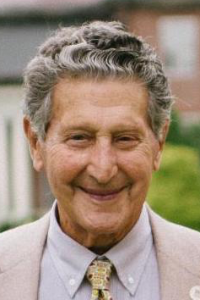 He was the beloved husband of the late Rose A. (Legge) Velluti who died in 2014.

Born in Franklin, December 23,1923 the son of the late Salvatore and Eda (Santoro) Velluti, he was a lifelong Franklin resident and was a graduate of Franklin High School Class of 1941.

After graduation Bernie worked as a machinist at Bird Machine Company in East Walpole before serving in the US Navy during World War II.

In the Navy he served as a Sonarman aboard the USS Corry (DD 463) a destroyer that led in the D-Day invasion of Europe providing transport escort coverage and fire support and was the only US Navy destroyer that was sunk when she struck a mine off Utah Beach in the early morning of June 6, 1944. In recognition for his service Bernie was awarded the World War II Victory Medal, American Theatre Medal and The European- African Theatre Medal and received his honorable discharge in 1946.

Upon discharge he returned home and resumed his job at Bird Machine traveling extensively around the U.S. repairing equipment for the pulp and paper making industry until he left the company in 1971. He also worked at Dante Motors in Franklin as a mechanic and in later years at Ingersoll Rand, The Waters Company and Sanborn Engineering.

His love of the ocean and sailing prompted him to purchase a 26-foot sailboat in the 1970’s, which he kept at Sesuit Harbor Marina in East Dennis for many years before moving it to Warr’s Marina in Wareham. He loved to tinker with all things mechanical and was always ready to lend a hand or a tool to a friend, neighbor or family member in need. Always good natured, cheerful and generous to a fault he often put others before himself.

Downplaying his age even in his 90’s he was known to call anyone younger than himself as “that kid” down the street even though” that kid” was 85 years old. He kept his youthful appearance from a combination of good genes and a healthy attitude toward life in general. His slogan for life was “Go with the Flow”. He never had a bad word to say about anyone and although he would sometimes throw caution to the wind and it would sometimes backfire it’s doubtful he ever regretted his actions. Always positive and hopeful that things would improve was how he lived his life.

He loved his family especially his granddaughters and always enjoyed the holidays, birthdays and other gatherings with extended family and friends eating, talking and reminiscing about the good old days.
He is survived by his sons Bernard Velluti of Sylva, NC and David Velluti and his wife Lisa of Franklin and his three granddaughters Katie Ennis and her husband Steve, Dana Shilalie and her husband Mike and Gina Velluti and her fiancée Jake Evers and his great grandson Teddy Shilalie.

He was the brother of the late Olga Mahan, Emma Rabaioli and Anthony Velluti.

The family would like to thank all his neighbors, friends and former coworkers too numerous to name who continuously provided loving support, kindness and compassion to Nino throughout his later years and allowed him to remain in his home until his final days.

Relatives and friends are invited to attend his graveside service, with social distancing guidelines, and face coverings, Thursday May 28th, in St. Mary's Cemetery, Beaver St. Franklin at 11AM.

In lieu of flowers, donations in his memory may be sent to a Veterans organization of your choice.