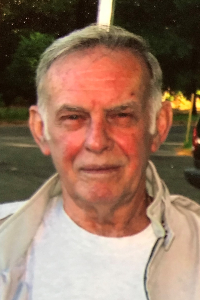 Paul R. Rancourt, 84, of Manville died Wednesday May 20, 2020 at St. Antoine Residence. He was the loving husband of the late Claire L. (Durand) Rancourt. They were married on September 17, 1955 and shared almost 58 years together until her passing in May of 2013.
Born and raised in Woonsocket he was a son of the late Marius and Cecille (Cloutier) Rancourt. He was a resident of Manville for over 50 years.
Mr. Rancourt served in the United States Navy during the Korean War.
Paul was employed as a union carpenter for many years before retiring. He was a longtime member of Le Club Par-X. A die-hard sports fan Paul was an eternally optimistic member of Red Sox nation. He lived and died with the Sox every year from spring until fall. Winter saw him switch gears as a staunch Boston Bruins fan to the core.
Paul had a green thumb as each spring and summer would find him tending his garden. Paul enjoyed the simple things in life and a had a great appetite for seafood – thank goodness he lived in the Ocean State. As a gifted woodworker Paul could built or craft anything. He built the house he lived in and always had a project underway. He amassed an arsenal of tools over a lifetime of working with his hands. Paul will be remembered as a devoted father and loved being a grandfather and great-grandfather.
Paul is survived a son Ronald Rancourt of Greenville and two daughters Suzanne Beaulieu and her husband Michael of North Smithfield and Michelle Rizzo and her partner Spencer MacDonald of Manville. He was the brother of Guy Rancourt, Denise Gervais, Helen Bernier, Rachel Corriveau, Yvette Gladu, Aline Laramee and the late Raymond Rancourt. He is also survived by several grandchildren, several great-grandchildren and many nieces and nephews and their families.
A Mass of Christian Burial in St. James Church, 33 Division St. Manville will be Saturday August 22, 2020 at 10:00 am. Burial will be private. In lieu of flowers memorial donation may be made to either the Woonsocket Veterans Memorial Museum 78 Earle St. Woonsocket, RI. 02895 www.veteransmemorialmeuseumri.org or the St. Ann Arts & Cultural Center P.O. Box 79 Woonsocket, RI. 02895 www.stannartsandculturalcenter.org. These organizations were very near and dear to Paul’s heart.
Arrangements are in the care of the Menard-Lacouture Funeral Home, 71 Central St. Manville.
www.menardfuneralhome.com