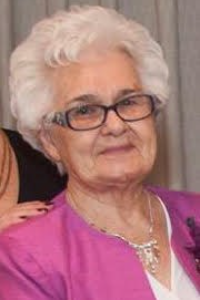 Virginia I. (Trevains) Nevens, of Plymouth, beloved wife of the late George A. Nevens Jr., and loving mother and grandmother, passed away on May 21, 2020, peacefully at Life Care Center in Plymouth. She was 94.

Virginia was born on June 10, 1925. Daughter of the late Samuel and Rachel (Isabella) Trevains. She was raised in Quincy and attended Quincy schools. Virginia raised her family in Whitman before retiring with her husband to Tunbridge, VT. She returned to Plymouth after his passing.

Virginia is survived by her sons and their wives, Kenneth and Michelle Nevens of Bridgewater; Dana and June Nevens of Plymouth; her daughters and their husbands, Diane and Philip Brennan of Mt. Dora, FL; Karen and Stephen Tobin of Norway, ME; 11 loving grandchildren, and 14 adoring great grandchildren. She is also survived by many nieces and nephews. She was the sister of the late Wallace (Spenser) Trevains, Samuel Trevains, Stanley Trevains, Russel Trevains, Mildred Murch, Ruth Warner, Edna Thompson, and Charlotte Sampson.

Virginia married George Nevens in 1948. She spent most of her life as a homemaker, finding great joy in raising her four children, then watching her grandchildren grow. She was an avid seamstress and had a great sense of fashion. She was a marvelous cook and baker. She was known for her Apple Pie.

Virginia had a beautiful and inviting smile, huge heart, and was a dear and loyal friend to many. She will be sorely missed by all.

The family would like to thank the nurses and staff at Life Care, Beth Israel Hospital, and Laurel Woods.

A private graveside service will be held at Colebrook Cemetery in Whitman. A celebration of life will be scheduled at a later date.

In lieu of flowers, donations may be made in her memory to Second Wind Dreams (www.secondwind.org).