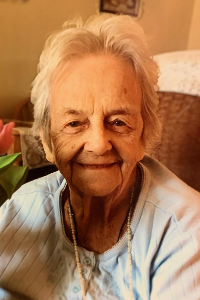 Florence Torre, 91, of Derry, NH, died Friday, May 22, 2020 in the Colonial Poplin Nursing Home in Fremont. She was born in East Braintree, MA on January 27, 1929, a daughter of the late Wilbur and Evelyn (Glover) Griffin. Prior to residing in Fremont, she lived in Derry since 1950, and Cambridge, MA. She was a communicant of St. Thomas Aquinas Church in Derry. She enjoyed NASCAR racing, playing Bingo, and crocheting.

Private services will be held in the Peabody Funeral Homes and Crematorium. The burial will be in Forest Hill Cemetery in E. Derry.