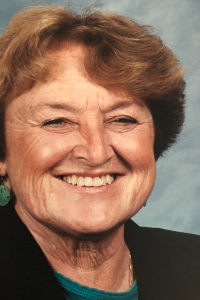 
AUBURN - The matriarch of the Malcolm and Sandra Philbrook family, Sandra G. Philbrook, born July 17, 1935, died on May 21, 2020 at the home she created at Fortune Rocks Beach. She was able to communicate her wisdom and love to her six children, eighteen grandchildren, ten great-grandchildren, and their spouses by both her action and deeds. Her love and devotion to her family was evident by the countless sporting and school events she attended. In addition to honesty and fairness she conducted herself in a manner that each member of the family found inspirational. We will all miss, “Wash your hands,” “Write a thank-you note,” and “Read a book.”
Sandra was the daughter of Violet and George Gibson and attended Lewiston Schools until her family moved to Kennebunk where she graduated from Kennebunk High School. In 1953 she married Malcolm Winter Philbrook and they settled in Auburn from 1961 to present. Sandra was active in all parental activities especially at Merrill Hill and Lake Street School programs. In addition she served as Bookkeeper for the Crockett, Philbrook, and Crouch Law Firm.
Sandra assisted in the creation of Hoop Basketball Camp in 1971 with her husband along with her sister-in-law and husband, Susan and Fern Masse, and served as an active Director of the Winter Foundation.
In 1984 Sandra embarked on a project to build a home on Fortune Rocks Beach that would create a sanctuary for her ever-growing family to gather. She hosted many family parties and “cousin’s week” each summer after Hoop Basketball Camp completed its programs.
Sandra is survived by her husband, Malcolm, her six children:
Deborah Belanger and her husband Scott
Sharon Bergeron and her husband Denis
Linda (Cookie) Dana and her husband Robert
Michael (Mickey) Philbrook and his wife Debora
Pamela Leary and her husband Justin
Karen Philbrook
Her eighteen grandchildren:
Craig Belanger and his wife Abigail
Nicole LaBrie and her husband Steve
Ryan Belanger and his wife Rachel
Robert Belanger
Riley Bergeron
Calvin Bergeron
Jen Finch and her husband Dave
Kate Dana
Elizabeth Dana
Kyle Philbrook and his wife Lauren
James Philbrook
Kelly Philbrook
Cameron Leary and his wife Becca
Karen Leary
Bowen Leary and his wife Ally
Quinlan Leary
Douglas Philbrook
Josslyn Philbrook
Her ten great-grandchildren:
Grace Belanger
Mary Belanger
Bradley Belanger
Caroline Belanger
Max LaBrie
Anne LaBrie
Ellie LaBrie
Chance Belanger
James Finch
Survived by her sister, Beverley Clough and her husband, William; her brother, George (Pudgy) Gibson and his wife Faye; her sister-in-law, Susan Masse and her husband, Fern. Sandra will be missed by many nieces and nephews, as well.
Sandra is predeceased by her brother, Robert Gibson, and her great-granddaughter, Bella Belanger.
We will honor Sandra with a Celebration of Life at a date and time to be announced in the future.
Online condolence messages can be submitted at the Chad E. Cremation and Funeral Service website. www.mainefuneral.com Please leave your email address if you wish to notified of the Celebration of Life.
Contributions may be made in Sandra’s name to the Auburn Public Library, The Dorothy Philbrook Endowment Fund, 49 Spring Street Auburn, Maine 04210-5946.