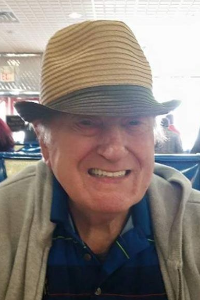 Richard James Barry, 75, of Derry, NH, passed away Tuesday May 19, 2020, in the Rochester Manor in Rochester, NH. He was born on January 9, 1945 in Somerville, MA, a son of the late Alphonsus and Bernice (Nolen) Barry. Richard proudly served his country in the US Navy and was a member of the American Legion Post #27 of Londonderry. He enjoyed fishing, watching boxing and shooting pool. In his heyday, Richard was an impeccable Al Jolson impersonator.

He is survived by his daughter, Stephanie Mackesy and husband Mark of Bennington, NH; two granddaughters, Colleen Paige and husband Sam and Mikala Mackesy; two great grandsons, Jason Paige and Jonathan Paige; one great granddaughter, Elizabeth Paige; a brother, William Barry and wife Cecelia of Kansas; two sisters, Violet Bonnett and husband Robert of Somerville, MA, and Bernice Reiss and husband Joe of Tewksbury, MA; as well as many nieces, nephews and cousins. He was predeceased by his beloved wife of almost 50 years, Joyce M. (Simpson) Barry in 2018 and his son Robert Barry in 1980.

A Memorial calling hour will be held on Saturday June 4, 2022 from 1 - 2pm in the Peabody Funeral Homes and Crematorium, 15 Birch Street, Derry. A Catholic prayer service will begin at 2:00pm in the funeral home. Services will conclude with Military Honors provided by the US Navy Honors team.