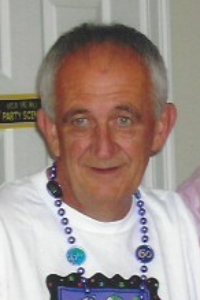 Paul graduated from Roslindale High School in 1966, and then served in the U.S. Navy from 1966 – 1969 during the Vietnam War on the U.S.S. Renshaw DD499. Upon release from the service, Paul had a 35-year career with the U.S. Postal Service prior to retiring to Florida. Paul enjoyed grilling, walking the dogs, and spending time with family. Affectionately known as “Papa Smurf”, he especially enjoyed kitchen parties with all of “his girls” singing along to classic hits by Chicago, never missing a beat. He will be deeply missed by all, including his faithful companion Buster.

He is preceded in death by his wife of 17 years, Patricia O’Connor Ahern; a brother, Francis X Ahern, his father George F Ahern and his mother Mary Patricia Ahern.

A celebration of Paul’s life will be held at a later date.

In lieu of flowers, please consider a donation in his honor to the Alzheimer’s Association @ www.alz.org.