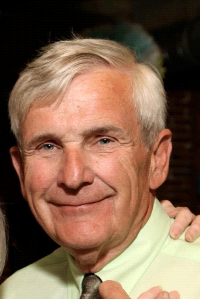 
Laconia---Donald Roberts Minor, 81, of Gilford, New Hampshire succumbed to Alzheimer's Disease on Wednesday, May 6 at Franklin Regional Hospital. He was born March 14, 1939 to Shirley and George Minor in Ludlow, Massachusetts, the middle child of 3 children. The family relocated to Alton Bay where he later graduated from Laconia High School in 1957.

His parents owned and operated the Mt. Major Country Store in Alton Bay where he worked. It was in the Bay that he discovered his love for Lake Winnipesaukee and his wife Judith at the beach in Harmony Park. They were married in October of 1962 and moved to Methuen to start their family. Don worked at Raytheon in Andover before starting his real estate investment business. He wanted to be his own boss so he began purchasing investment properties in the Greater Lawrence area, amassing an impressive self-grown business with over 20 employees. His work ethic was unmatched as was his tenacity to “get the job done”. It was his philosophy to never ask anyone to do something he would not do himself. He was a member of the First Church Congregational in Methuen, serving on multiple boards and growing a friendship with Rev. Ladre. For several years he would purchase toys and play Santa, delivering them to tenant’s children he knew would go without Christmas morning. In 1985 the family returned to his beloved Lake in New Hampshire to “retire”, moving into a lakefront home in Gilford. Never one to sit still long, retirement did not suit Don and he started buying investment properties in the Lakes Region, establishing the Lakes Region Rental Association.

Don's greatest passions after his family were wood boats and he loved taking his family for rides on the big lake in his Chris Craft's. Saturday morning donut runs with his grandchildren were very special for all involved. A member of the Antique & Classic Boat Society, Don chaired the Antique Boat Show at the Weirs multiple times. He was also instrumental in the founding of the New Hampshire Boat Museum, spreading his passion of wood boats to the Lakes Region. There was nothing he loved more than having large gatherings with close friends and family. He always felt the more the merrier! His love for his family was unmatched. Heaven truly took in a good one, pretty sure he has his tool belt ready to go and willing to help with any necessary repairs. He will be forever remembered for his kindness, compassion, generosity and integrity.
Don was predeceased by his parents George and Shirley Minor, stepfather Al Recks, and daughter Kelly Ann. He is survived by his wife of 58 years Judith Minor, his sisters Gail Babin and husband Louis, Penny Jones and husband, Russell; sons, Donald R Minor II and wife Amy, Scott Minor, Tim Minor and his wife Sheri, Shawn Minor and his partner, Rachyll Patten. He will be truly missed by his ten grandchildren Jessica, Jennifer, Alexa, Mikayla, Scott Jr, Donald III, Meya, Parker Rhiannon Lefrancois and husband Aaron and Chelsea Briggeman and husband, Hunter. His two great grandchildren Wesley and Griffin Briggeman and also several nieces, nephews, and cousins.

Due to Covid-19 there will be a celebration of life at a later date.

In lieu of flowers, memorial donations can be made to St. Jude Research Hospital, 501 St. Jude Place, Memphis, TN 38105.