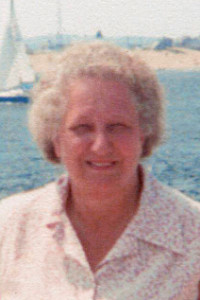 GRANBY – Helen G. (Gansor) Mekal, 94, of Granby, was Called Safely Home on Mother’s Day, Sunday, May 10, 2020. She passed into Eternal Life at Vero Health and Rehab of South Hadley surrounded by all of the memories that she loved and cherished. She was born at home on Perreault Street in Chicopee on August 23, 1925, a beloved daughter of the late Karol and Mary (Gazda) Gansor. She was raised in the Willimansett section of Chicopee, graduated from Chicopee High School in 1943 and had moved to Granby in 1957. She had worked at the Holyoke Taxpayers Association and the Marvellum Corporation, both in Holyoke. She was a communicant of Saint Anthony of Padua Church in Chicopee. During her leisure time, she enjoyed playing Scrabble, working on jigsaw puzzles and solving word jumbles and cryptograms in the newspaper. She had also wintered in Florida for many years and enjoyed spending time at the ocean. Above all, she was a loving homemaker to her family and friends. She was predeceased by her beloved husband, Felix K. Mekal who was Called Home on May 3, 2003. They were married on May 30, 1948 at Saint Anthony of Padua Church in Chicopee and were blessed with over 54 years of happiness together. She leaves her loving daughter and caretaker, Patricia M. Edgin of Valley, Washington; her cherished great-granddaughter, Chantel Williams of Spokane, WA; her five cherished grandchildren, 13 additional great-grandchildren; five great-great-grandchildren; her dear brother-in-law, Edmund Mekal of West Springfield; her dear sister-in-law, Veronica Robison and her husband, James, of Maine; and her many dear nephews, nieces, cousins including her first cousin, Nellie Przybylowicz, extended members of the Mekal family and many friends. In addition to her parents and husband, she was predeceased by her three loving sons, Ronald J. Mekal who was Called Home on February 15, 2019, Kenneth M. Mekal who was Called Home on July 24, 2016 and David F. Mekal who was Called Home on June 28, 1998; her loving son-in-law, Jesse L. Edgin who was Called Home on September 19, 1994; her dear brother, John Gansor and his wife, Beverly; her two dear sisters, Jennie Bernat and her husband, Stanley and Celia Gonet and her husband, Edward; and her dear sister-in-law, Joan Mekal. Due to the current circumstances, her funeral and burial will be private. Her funeral arrangements are entrusted to the St. Pierre-Phaneuf Fairview Chapels (413-533-3307), 506 Britton Street, Chicopee, MA 01020. A Memorial Mass will be held in the future at a date and time to be announced. In lieu of flowers, memorial donations may be made in her memory to the Shriners Hospital for Children, Springfield Unit, 516 Carew Street, Springfield, MA 01104. For more details and to leave her family condolence messages, please visit:
www.stpierrephaneuf.com