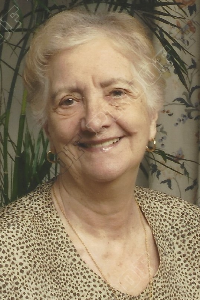 WORCESTER___Maria Alicia (Lopez Pena) Quintela, age 95, passed away peacefully on Sunday May 3, 2020 at Christopher House in Worcester where she had resided for the past 10 years as a result of a long struggle with Alzheimer’s disease. Prior to this she resided with her daughter and son-in-law in Holden, MA.

Alicia, as she is best known to family and friends, was born on April 26, 1925 in the small village of Loseiro, Lugo, in the northwest region of Galicia, Spain. She was the eighth of 9 children born to Manuel Lopez and Filomena Pena. Alicia was predeceased by all eight of her siblings, Dolores, Jose, Carmen, Antonio, Amador, Luis, Celestino and Manuel all of whom resided in Spain. Following the Civil War in Spain, Alicia joined her brothers, Amador and Luis in Madrid, Spain where she apprenticed as a tailor under their tutelage and became a very talented seamstress. She later relocated to Vigo, Spain where she was the chef at a restaurant owned and operated by her younger brother Manuel and where she would meet her future husband.

Alicia is also predeceased by her husband Valentin Quintela who passed away on March 16, 1983 and was also from the same region of Galicia. Alicia and Valentin were married on December 11, 1957 in Loseiro, Spain and shortly thereafter departed Spain for Havana, Cuba where her husband had previously resided and had established a business and residency. During their time in Havana they had two children, Manuel (Manny) and Alicia (Lali). In 1967, as a result of the hardships experienced from the policies of the Cuban regime, they immigrated to the United States and eventually settled in Worcester, Ma. where they raised their family. Upon arriving in the United States, Alicia and Valentin worked tirelessly to provide for their family, working alternate shifts at the L. Farber leather welting factory to ensure they were able to provide constant care for their young children. Alicia and Valentin were forever grateful to have had the opportunity to pursue their own version of “the American Dream” and were very proud of attaining American citizenship for their family. Over the years the Quintela family received incredibly generous support from many local families who helped them assimilate and thrive in the Worcester community. Alicia was later employed at Montrose Corp. and the College of the Holy Cross before retiring in 1990.

Despite their love and admiration for their new country which provided seemingly endless opportunities, particularly for their children, like many immigrants they never forgot their roots. They insisted that their children understand the importance of their origins and meet the extensive family they had in Spain. In spite of the distance between Spain and the U.S., strong family bonds were established and are maintained to this date.

Alicia had many talents, sewing, knitting, gardening, but most memorably, a love of cooking. Alicia introduced many friends and neighbors to a new world of Spanish and Cuban cuisine at a time when it was still relatively unknown. Known affectionately as “Ma” to many of her children’s friends, she enjoyed nothing more than cooking for the many kids that traipsed through her little pink house on College Hill. Another of Alicia’s notable qualities was her inability to let a room go quiet. A great conversationalist, she had never ending stories to tell and a sharp sense of humor.

Alicia is survived by her son, Manuel Quintela and his wife Nancy of Shrewsbury, MA, her daughter, Alicia Howarth and her husband James of Holden, MA and two grandsons, John and Alex Quintela. She is also survived by many nieces and nephews in Spain who will miss her dearly.

Alicia’s family extends their sincerest appreciation to all of the staff at Christopher House who provided our mother with skilled, warm and compassionate care during the past ten years and treated her like family. Our gratitude extends in particular to Administrator Sandra Mahoney, Dr. Christine MacGinnis, members of the CARE team, Fawn from the Brookside unit and Brookside nurse Gilda, who lovingly attended to Alicia from her first day at Christopher House 10 years ago.

Given the current circumstances due to Covid-19, funeral services will be private. If desired, donations in Alicia’s memory can be made to Christopher House, 10 Mary Scano Drive, Worcester, MA 01605, attention Sandra Mahoney, Administrator. HENRY-DIRSA FUNERAL HOME, 33 Ward Street, Worcester is assisting the family with arrangements. Friends of Alicia and her family are invited to share memories and condolences on her online guestbook at www.worcesterfuneral.com