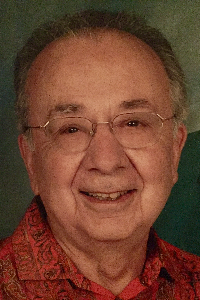 Dedicated husband, loving father, devoted Catholic, committed public servant, loyal 3Mer, and all around great guy. Jerry Belisle, after recently living with lung cancer, made his peaceful transition into the next life on April 22nd, surrounded with love.

Born on a small dairy farm in Polk County, Wisconsin, to Alfred and Eva (nee Langlois) Belisle in the heart of the Great Depression, Jerry’s early life formed him (and his six siblings) in ways that would last a lifetime. In addition to appreciating every good thing that came his way, Jerry became driven by his ideals of service to others, loyalty to family and friends, and a generosity of spirit that came from his deep faith in God.

Jerry served as an MP in the Army at the end of the Korean War, was a leader in the St. Paul Jaycees and his beloved Dominics Club where he met his wife of 58 years Jeanne (McEnaney, d. 2019) and many of his closest friends. Jerry and Jeanne had four children, all of whom survive them: Michelle Duncan of Brookings, SD, Patrick (Jane) Belisle of Charlottesville, VA, Jennifer Belisle of Hudson, WI, and Gregory (Amie) of Portland, OR. Their home and that Wisconsin farm were always buzzing with music and laughter, political conversations and social activities. Jerry also had 12 grandchildren, 3 great-grandchildren, and dozens of adoring nieces and nephews. He also loved his six siblings, two of whom survive him: Sister Clare Belisle, CSJ, of St. Paul and Rita Lund of Stillwater, MN, who remained his closest friends to the end.

Public service was always part of Jerry’s life. He served for many years on the first town council of Oakdale, MN where they lived for 50 years, then was elected State Representative in 1972. He worked at 3M for nearly 40 years and, in his retirement, volunteered for them and for the Minnesota Historical Society.

Jerry was an active member of Transfiguration Catholic Church for most of the past 60 years and served on their parish council (inc. a stint as president). From his days as an altar boy in Georgetown, WI through his attending daily mass at Carondelet Village where he lived these past six years, the Church was always a central part of his life.

Due to the current COVID-19 situation, Jerry’s Funeral Mass at Transfiguration Catholic Church, Oakdale, MN will be Wednesday, May 20 at 11:00 am and will only be accessible online via live-stream on our Facebook page. Memorials may be sent in care of Michelle Duncan, 1420 5th St. S, Brookings, SD 57006.

We were all blessed to know Jerry Belisle. What a beautiful life he lived. “Well done, good and faithful servant.”