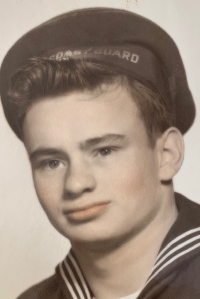 
CUMBERLAND- Robert Joseph Hartman passed away peacefully and surrounded by his adoring wife and family in Cumberland Maine on April 26th, 2020 at the age of Eighty-Seven.
Robert is survived by his loving and devoted wife Dorothy (Bragdon) of nearly seventy years, and his 5 children: sons James (Penny) Hartman of Portland Maine, and Bruce (Connie) Hartman of Asheville North Carolina, and daughters Suzanne (Doug) Alsop of Valrico, Florida, Elizabeth (Gregory) McCarthy of Cumberland, Maine and Dorothy (Tom) Schwaed of Freeport, Maine and his sister Nancy Leblanc, of Auburn, Maine. Robert, always known as Papa Bob to his prized and admiring thirteen grandchildren and eleven great-grand-children.
Robert was born on November 24rd, 1932 in Pittsburgh, PA to Nevin and Mary Elizabeth (Wilson} Hartman. He was preceded in death by his brother Chuck (Mary Rose) Hartman and sister Shirley (Louis) Zakraysek
Robert married Dorothy, his cherished life companion and best friend in 1951. After moving to Portland and serving his country in the Coast Guard, he enjoyed a long and successful career with Verizon (Formerly known as New England Telephone). Robert began working for Verizon as an Equipment Installer. He steadily rose through the ranks and was the manager that directed the installation of many central phone offices, throughout New England and in his later years rebuilt central phone offices in Puerto Rico as well as internationally in Gibraltar and Hungary.
Over eleven years, the couple welcomed five children into their home. Robert’s children remember him as a wise and steady influence, who encouraged them to be independent and always be the best in pursuing their life goals.
Robert was accomplished at computer systems. In fact, built his own computer and coded home computer games. He was a quiet man, but each word he spoke contained wisdom and integrity. His life goals were simply to provide for his family and his wife. For his children, grand-children and great-grand-children he was a model of how to live life with warmth, respect and love.
Each of his children and grandchildren were able to say goodbye, in his last days, and many heard the words “I love you.”
He left this world with Dorothy, his wife, holding his hand.
A private memorial service will be held when the current travel restrictions are lifted. A virtual visitation service to leave messages for the family will be held on Zoom, Thursday, April 30th from 4-7PM. Visitors can attend by going to Zoom meeting room 8291642936. In lieu of flowers, please send donations to Hospice of Southern Maine, 180 US-1, Scarborough, Maine 04074 or Foreside Community Church, 340 Foreside Road, Falmouth, Maine 04105.
Online condolence messages can be submitted at the Chad E. Poitras Cremation and Funeral Service website, www.mainefuneral.com
The family would like to thank Hospice of Southern Maine for their wonderful support in helping the family peacefully guide Robert to his heavenly home.